On October 25 - after an Early Access period of about two and a half years - the release of Mount & Blade 2: Bannerlord finally took place on PC, PS4, PS5, XOne and XSX/S. To mark the occasion, the game's developers, Turkish studio TaleWorlds Entertainment, has prepared a sizable discount on Steam, GOG and Epic Games Store. On the other hand, a fan of Bannerlord - on Reddit, going by the handle Zamzamazawarma - has updated the map of resources available in the game.

Its predecessor was created by the Netizen for the version 1.7.0 of Bannerlord. Now Zamzamazawarma has updated his work with changes that took place in the game after Early Access ended. Interestingly, one of them turned out to be the topography of Calradia, specifically the area extending north of the lake in Battania - the river that previously flowed there has been removed. 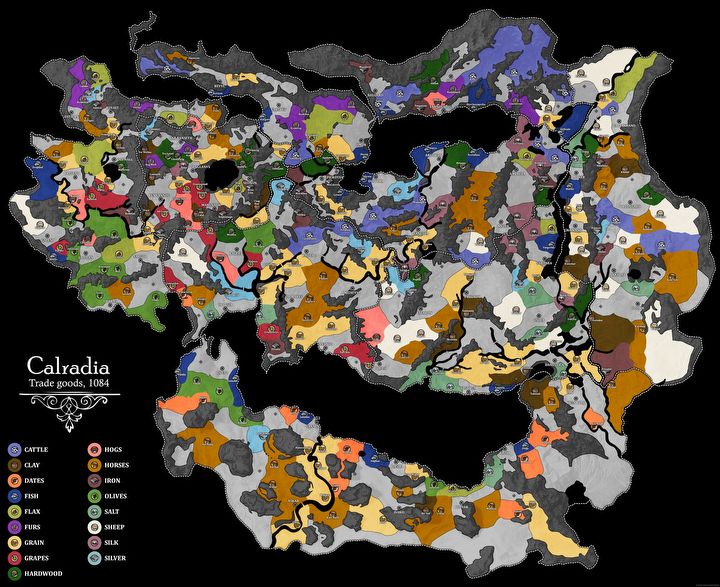 The above map is current as of October 31 - Zamzamazawarma, however, does not rule out the possibility that it may contain minor errors. So if you are reading this news at a (much) later date, I recommend you take a look at this page, as the developer may have made some corrections.

And if you don't know what the map in question can be useful for, I hasten to explain that it will be excellent for optimizing income from trade. Individual goods marked on the map - iron, silver, silk, furs, salt, olives, etc. - can be purchased cheaply in some regions of Calradia and sold at a high profit in others. In an area where a resource occurs naturally, you won't earn much from it - it's better to go where it's hard to find, e.g. it's worth buying horses in Askara and selling them in Balgard.

The map can also be useful if you do not intend to delve into trade. This is because many of the resources marked on it are used in blacksmithing (crafting). So it is worth making sure that we purchase them at a favorable price.

It is worth adding that Bannerlord collects very positive reviews - both from industry critics, as well as players on Steam.

Thousands of Players Get Fake Bans in Modern Warfare 2

Cosmoteer - railgun and other weapons

Thousands of Players Get Fake Bans in Modern Warfare 2

Cosmoteer With Enthusiastic Reviews on Steam

MGS 3 Remake From Virtuos - One Rumor Debunked, Another Persists