In Grand Theft Auto Online another weekly event has begun, this time centered around the Diamond Casino. Players will receive twice as many reputation points and dollars for completing quests and story missions there. Even more profitable will be the Diamond Adversary Series: each will provide us with triple rewards. These and other bonuses (see below) will be valid until November 24.

If you're not interested in activities in the casino, you'll also gain twice as much reputation for winning races (to be more precise: sprint) in the LS Car Club. The same goes for the drop zone, which will also reward us with double the amount of dollars.

In addition, Rockstar has prepared a handful of bonuses. This includes a gift for buyers of Grand Theft Auto: The Trilogy - The Definitive Edition in the form of a prison jumpsuit straight from Liberty City. Quite a unique gift, but it makes sense in the context of the current situation with the remaster set. To get this outfit, we need to have both titles (i.e. GTA Online and The Trilogy) linked to a Rockstar Games Social Club account, launch any game included in the definitive edition of the trilogy, and log into Grand Theft Auto Online no later than November 25.

For those who don't like to experience the "charms" of the refreshed editions of the GTA series, there's a gift for completing the casino heist finale: a red classic Diamond t-shirt (available to pick up beginning December 2, 72 hours after logging in). Players will also have three cars to test on the test track (Emperor Vectre, Dinka Jester RR and Pfister Growler) and a Weekend Driver designation for the Bravado Banshee for starting the game. In addition, Warstock Cache & Carry will offer a free Declasse Burrito van with the Bugstars logo. 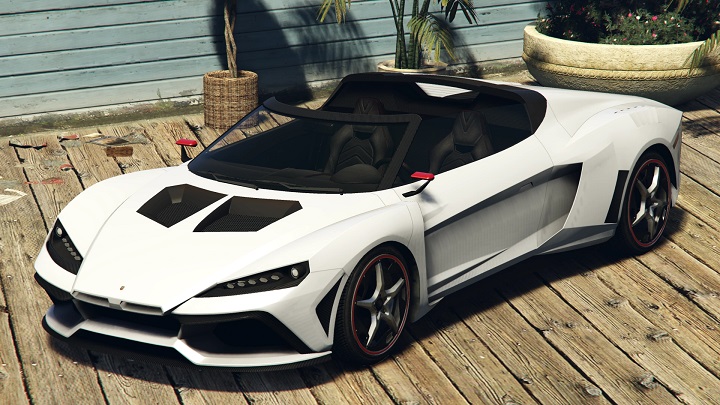 Another car to win awaits players at the casino.

Speaking of cars, there will be two models to win this week. With a bit of luck we will be able to come into possession of a Pegassi Zorrusso "hypercar" in the casino. And for winning the LS Club series for three days in a row we will receive a Vapid Dominator GTT. In addition, until November 24 there are discounts on selected vehicles (as well as on clothing and upgrades and mods to the casino penthouse). Details can be found here.