The information about the first season of Battlefield 2042, which has been revealed so far hasn't exactly excited gamers. New reports on upcoming content were shared by Temporyal on Twitter. According to the dataminer, Zero Hour season will introduce, among others, a Polish specialist.

Ewelina Lis, known as the "Guardian of Gdansk", is supposed to specialize in using a guided rocket launcher, which will supposedly be one of the new gadgets. We don't know anything about other items of this type or the rest of the new weapons yet, but Temporyal mentioned another map (Exposure) and vehicles (attack helicopters equipped with stealth technology).

These and other news revealed by the informant can be seen on the graphic below. 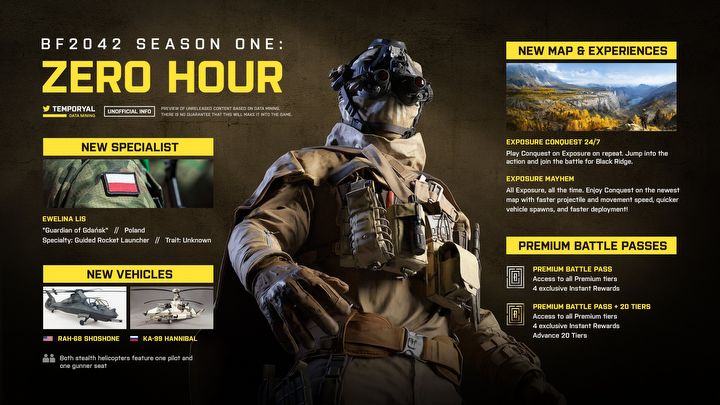 In addition to the above and other, yet undisclosed news the first season of Battlefield 2042 will also introduce weekly missions and combat passes: free and premium (including a gold version that enables us to instantly earn twenty pass levels).

There will also be various improvements to fix bugs still present in the game. We can find out all about the first season in a video prepared by the developers for June (via Battlefield 2042's official website).