Rockstar Games' gangster franchise is one of the most recognizable titles in the world. Often even people who are not gamers can easily associate the GTA acronym. No wonder that clones of this extremely popular game are still being created. The game with quite an intriguing title 171 clearly tries to ride the wave of success of the iconic brand. The developers at Betagames intend to release the game on PC, PS4, Xbox One, Switch and, what's interesting, even on next-generation platforms, namely Xbox Series X/S . In an interview for Gematsu, Marivaldo Cabral, CEO of QUByte Interactive, said there should also be a version for PlayStation 5.

"We would like to announce our partnership with QUByte Interactive, which will be responsible for porting and introducing i>171 to the PS4, Xbox One, Nintendo Switch and next-generation Xbox consoles from the X and S series. More news about the game will be posted soon!"

The action of the game is to take place in a fictional Brazilian city. From the materials published so far, it appears that most of the areas resemble favelas. The story doesn't even seem to be very original. The protagonist Nicolau (or Nico), instead of being a law-abiding, hard-working citizen, chooses the wrong way. The title is supposed to offer typical sandbox gameplay, shootouts with the police and a city full of NPCs responding to the player's actions. Vehicles can be tuned (or at least offer different rims). 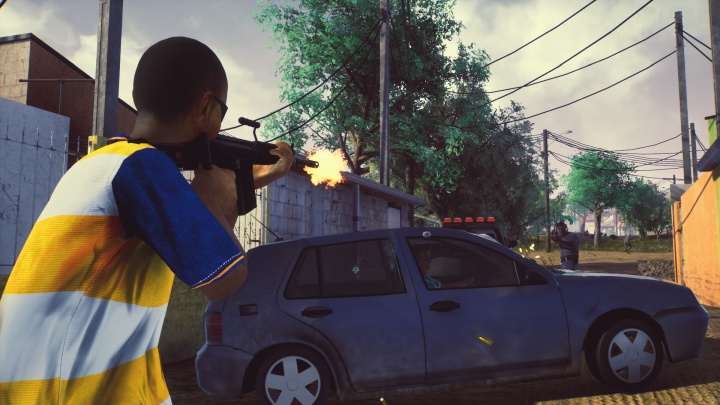 In total it's not so bad, it even has bullet holes :)

How does it look like in practice? Trailers of 171 could be considered impressive... about ten years ago. Graphics, to put it mildly, are mediocre although I saw much worse GTA clones in my time. How is this product supposed to compete with other titles on Xbox Series X/S (and even on PS4)? Really, it's hard to answer that question. Gameplay makes a slightly better impression, shootouts looks bearable, the vehicles seem to be using some kind of driving physics. Interestingly, the history of Twitter entries shows that the title has been created for over 5 years. Currently, the game has pre-alpha status, and the release date is define as "Em Breve", which means "soon".