Information about the leak of the new anti-cheat for Call of Duty: Warzone caused groans of disappointment among the players. No one expected that this was... a somewhat deliberate action by the developers. The matter was initially reported by Vice, but soon confirmation came from Activision itself.

As we read, the team behind Ricochet sent out a pre-release version of the security feature to selected players, which is a normal process to detect vulnerabilities and bugs. Some of these people were apparently indiscreet and passed it on to cheatmakers, but Activision was aware that this would happen. 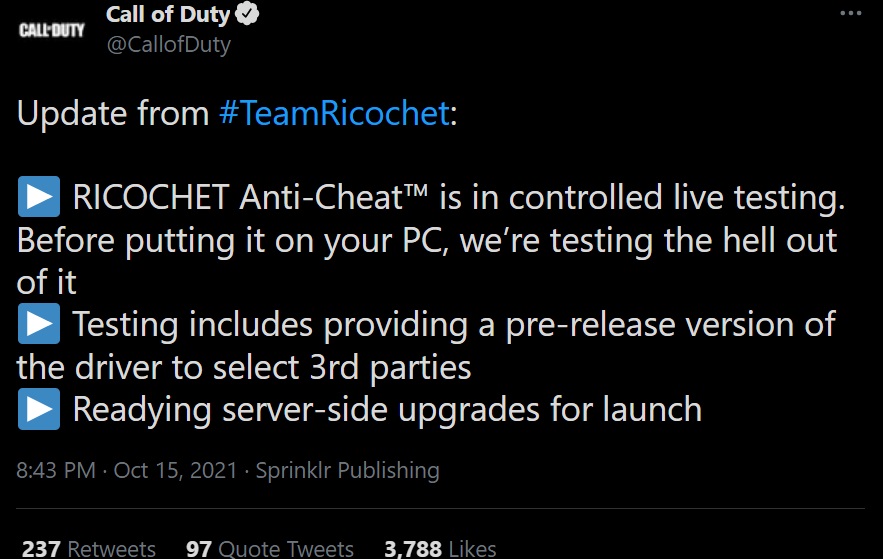 Vice's source also claims that this leak won't be a huge help to cheaters. As mentioned, an early version of Ricochet has been made available to the players, and while it does include the so-called kernel driver (an important part of the system), according to the magazine's interviewee, it doesn't make much difference. More skilled cheatmaker would defeat this first version of the security anyway, and "less advanced" cheaters don't have the skills to take advantage of this leak:

"That will help the people that would in any case be able to bypass that first version. The less advanced cheaters are screwed either way as they dont have the skills to come fight in the kernel."

Activision has also confirmed that they are working on server-side security improvements. Ironically, the developers can also benefit from the fact that cheaters have already gotten their hands on an early version of Ricochet. There is a chance that this will enable them to find vulnerabilities that are being exploited by cheaters.

However, not everyone shares Activision's faith in Ricochet's effectiveness. A popular Twitter profile of the Anti-Cheat Police Department believes that the system will not be very effective, because apparently the cheatmakers only need "a few hours" to bypass the kernel driver security and obtain the necessary information. However, Paul Chamberlain (formerly responsible for anti-cheat solutions at Riot Games, currently employed by Epic Games) points out that the early version of Ricochet could lack the so-called obfuscation, which makes it much harder to crack the security .

Nevertheless, the information reassured at least some of the fans. No one (at least not gamers) would want the battle against cheaters in the new Call of Duty to be lost even before the game's debut - as it happened in the case of Battlefield 2042. We can only hope that Ricochet will prove to be more effective in the fight against cheaters than the previous "reliable" solutions.