During the nine months of Cyberpunk 2077's presence on the market, players have found many easter egges. Most of them were references to pop culture. Portal, Batman, Death Stranding, Mortal Kombat, Mad Max, The Matrix, Ghost in the Shell - one could go on and on (the more interesting ones are described here). However it would be ignorant to think that everything has already been discovered. This is shown for example by a recent finding of a Reddit user by the handle Feeltherush2132. Using the flying katana glitch (explained here), the player climbed one of the taller buildings in the Santo Domingo district (within the Arasaka Industrial Park). At the top, he discovered two chests containing epic items and a giant "Well done" sign - congratulations from the creators for reaching a seemingly inaccessible place.

Someone might say "weak" or that "using glitches doesn't count". Relax, it's possible to get up there without resorting to cheating. You'll need to equip your V with cyberwar that enables higher jumps and unlock some skills, but it's possible. A video recorded by YouTube user DefaultDanielS proves it. Check it out for yourself.

How many similar finds are still waiting to be discovered in Night City? I hope quite a few. This particular one was prepared by Phillipp Weber, one of the quest designers at CD Projekt RED. When asked about the easter egg by one of the twitter users, the developer admitted that he wanted to reward the more creative players. 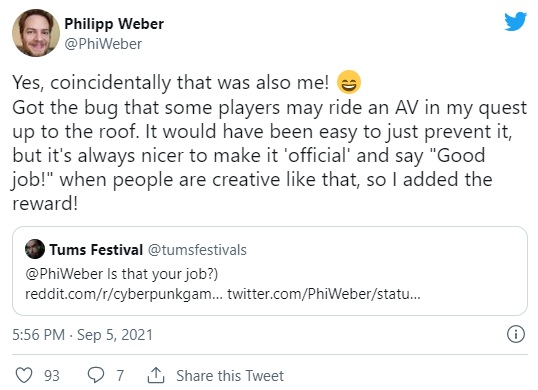 To make things more interesting, Weber hinted at the existence of such an easter egg in Cyberpunk 2077 back in March, reminding of several secrets hidden in the world of The Witcher 3. Geralt - just like V - had to do a lot of jumping to reach some of them.