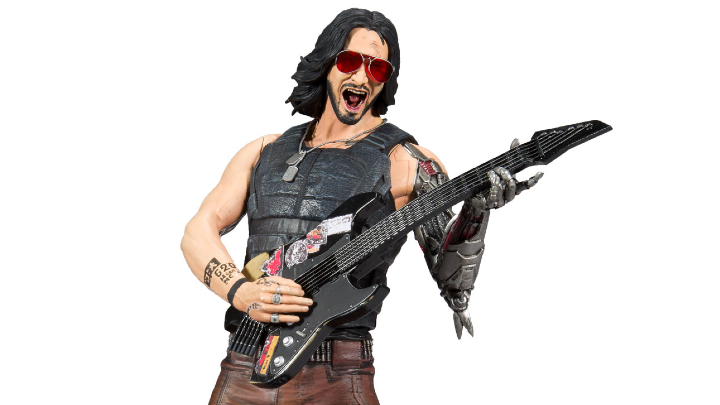 Would you put this Silverhand on your shelf?

Do you regret that Cyberpunk 2077 Collector's Edition doesn't include a Johnny Silverhand figure? Or maybe you already ordered it, but would like to put the famous musician with Keanu Reeves' face next to the main character?You can do this now thanks to McFarlane Toys, which has launched a pre-sale of figures related to Cyberpunk.

The offer includes a male version of V, the game's main protagonist, and the aforementioned Johnny Silverhand. Both figures have 22 movable parts and are about 17 centimeters high. The main character of Cyberpunk 2077 comes with a stand, katana and a gun (Kang Tao-Dian SMG and Militech Saratoga Pistol). Instead of weapons, the musician received a guitar strapped to his belt, a bottle and a spare hand arranged in a characteristic rocker gesture. There is no denying that these are "budget" versions, which is reflected in their quality. The material used in the production of the figures, i.e. plastic, is also not impressive. Their price is about $25.

The company also sells an unmovable figure that shows Johnny Silvehand playing his guitar. This model is about 30 centimetres tall and looks much better than its smaller "brother". The price of the figure was set at 39.99 dollars.

The figures are to be sent out in spring this year. Walmart and GameStop are responsible for their distribution and do not ship to some countries. However, it may be possible to buy them on Amazon, as with other McFarlane Toys figures.

Cyberpunk 2077 is scheduled for release on April 16 2020 on PC, PlayStation 4 and Xbox One. Those who have decided to buy the collector's edition can count on, among other things, a 25-centimeter figure presenting the main character. Interestingly, despite its high popularity and limited number of copies, this version is still available.