SAMURAI is an extremely popular band playing the so-called chromerock in the universe of Cyberpunk 2077, the leader of which was Johnny Silverhand (in the discussed production he will be played by Keanu Reeves). In order to illustrate his musical achievements, CD Projekt RED started cooperation with punk rock band Refused, which was announced in an official announcement. The Swedes are to prepare and record a number of songs, among which we will find both completely new compositions, created from scratch with Cyberpunk 2077 in mind, as well as tracks inspired by lyrics from the tabletop Cyberpunk 2020. A foretaste of how they will sound is given by the song Chippin' In; its fragment could be heard in the latest game trailer, prepared for this year's E3 fair. You can listen to the whole thing below.

It is worth noting that the process of creating music is supervised by a team of composers headed by Marcin Przybylowicz - music director at CD Projekt RED, who has in his portfolio, among others, a soundtrack for The Witcher 3: Wild Hunt.

As a curiosity it should be added that Przybylowicz convinces that among the creators of Cyberpunk 2077 there is no shortage of fans of Refused, among others one of the composers - Piotr Adamczyk - who came up with an initiative to have this particular group take care of the sound and vocal of the band SAMURAI. Swedish punk rockers say that although they live in a slightly different reality, like SAMURAI, they consider themselves to be musical rebels, and working with the Polish studio is not only a "completely new, exciting challenge", but also an opportunity for "great fun". 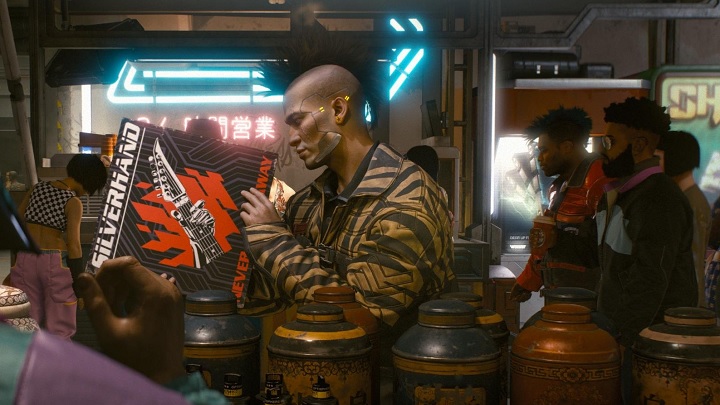 Cyberpunk 2077 is coming to PC, PlayStation 4 and Xbox One, and will debut on April 16, 2020. As we informed earlier, the game is one of the three cyberpunk projects created by CD Projekt RED - the remaining two are the multiplayer mode, which is handled by the Wroclaw branch of the company, and a new major title. In addition, the team plans to release one more "AAA class narrative game" by 2021.