This past Sunday proved to be a problematic day for some gamers, as many people were unable to launch their favorite titles. The web was quickly flooded with information that this does not apply only to one or a few selected titles. The problems affected both new productions, such as Marvel's Guardians of the Galaxy, and older items, among which we can mention the Tomb Raider series, Wolfenstein: Youngblood, Planet Zoo, Mortal Kombat 11 or Total War: Warhammer.

A notification about the inability to connect to servers, which appeared on the occasion, caused many players to suspect that the error lies on the side of Denuvo. One of Twitter users posted a screenshot that suggested the company had failed to notice the expiration of the domain supporting the DRM tools. Fortunately, we didn't have to wait long for a response from the security team. 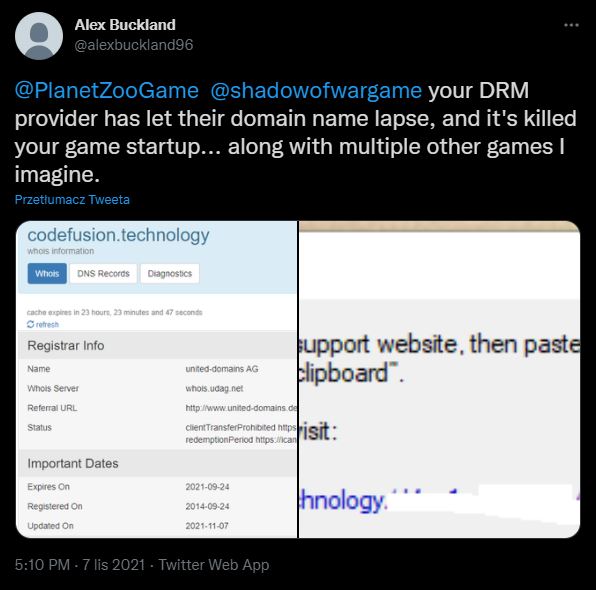 On Monday, Denuvo released a statement, published by PC Gamer, in which the company admitted that the source of the problems was domain name issues. The situation has been brought under control and players should not experience similar situations again. The company has also introduced appropriate safeguards to prevent such incidents in the future.

So the problem was solved relatively quickly. However, Denuvo is not very popular among gamers, and this kind of situation makes the company's reputation drop even further. It remains to be hoped that such mistakes will not be repeated.

Microsoft Flight Simulator Even Prettier With Maps From Google

Bethesda has an Idea for Fallout 5, but We Won't See the Game Anytime Soon

Apple-1 Expected to be Auctioned Off For $600 Thousand