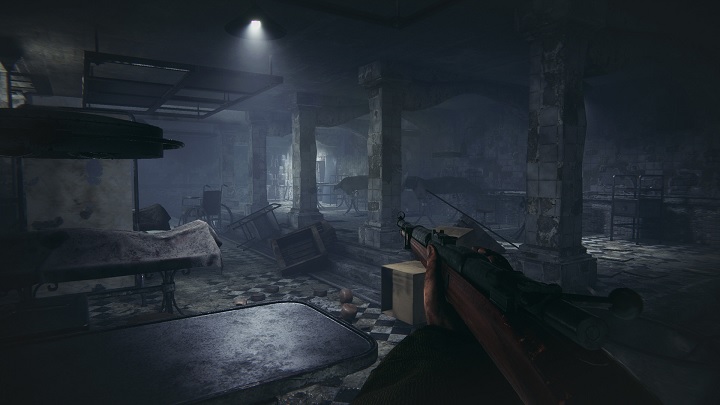 Authors of the new Polish FPS bet on authenticity, but not at the cost of gameplay.

More than half a year after the announcement of Land of War: The Beginning - the Polish FPS set during the invasion of Poland in September 1939 - the devs at MS Games finally raised a very important issue. In the second episode of dev diary, the creators talked about how they remain in line with historical reality in their production and how it will affect the gameplay. Work on the game was preceded by a search for memoirs, either from the times of the conflict itself, or describing the actions of the partisans and the resistance movement. The team quickly found out that the available source material is rich, featuring many colourful episodes and examples of heroism. The creators were also attracted by the fact that the events of 1939 were not yet presented in video games, as was the equipment used by both sides of the conflict:

"We also wanted to show less known, conceptual weapons, native to this war theater and not utilised in later stages of WWII, because Polish equipment was not used by other armies and German equipment was quickly replaced with newer constructions, created on the basis of experience gathered during Polish campaign."

Eventually, MS Games chose a little over 20 stories, perhaps leaving the rest for the next, potential sequels. Only then did the fieldwork begin. The creators visited the actual battlefields (and related museums) and gathered information about them. Historical studies and conversations with the caretakers of these objects proved to be helpful, as well as support from enthusiasts and reconstruction groups from around the world. Thanks to this, MS Games was able to determine which troops and equipment (weapons, vehicles, uniforms) were used in a given clash. Some of the creators also went to shooting ranges to check their impressions of using weapons from 1939 and compare them with modern weapons.

All of this is evidence of the care taken by the Polish developers. However, a question arises: did the developers not forget about the game itself in the pursuit of authenticity? The aforementioned post also mentions that most attention was paid to the issue of a sensible balance between the historical reality and the gameplay. Land of War is supposed to be a "traditional" FPS, which is why MS Games has introduced some - let's call it - facilities: places to hide, spots where we can rest before proceeding, or sneak past our enemies. However, the team decided not to change the most "iconic" locations. As it will come out in practice, we will find out after the release of the game on Steam this year. Let's hope that Land of War will achieve what it aims to do.

DayZ Devs are Working on a Massive Survival Game