Techland is not idle - after two DLCs for Dying Light 2 the developer released a patch, announced several months ago and upgrading the first installment to the next-gen version. For some reason, for the time being it is only available on PlayStation 5. Xbox X and S Series owners have to be patient - the update will be available on their consoles in a few days.

Recently released Dying Light 2 is not a perfect game, but it was received quite warmly. What did Techland manage to do best? You can find out in our texts: 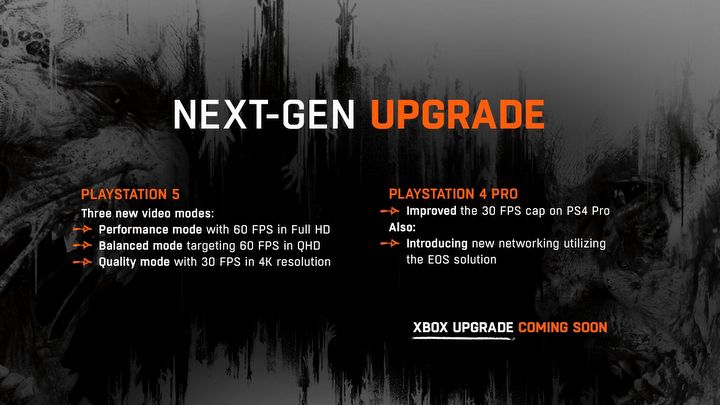 Dying Light version dedicated to PS5 and XSX enables us to play in three graphic modes - performance, quality and balanced. Choosing the first gives a constant 60 frames per second at a resolution of 1080p, while choosing the second, we can count on image displayed in 4K, but the fps limitation to 30. The intermediate mode is to aim at 60 frames and a resolution of 1440p.

The patch is (will be) also worth downloading on PS4 Pro, XOne and XSS, because it will improve the performance mode offered on these consoles so that it delivers a consistent 30 fps at 1080p.

Next State of Play Officially Tomorrow

STALKER Review Bombed After Being Pulled From Sale in Russia

STALKER Review Bombed After Being Pulled From Sale in Russia

Next State of Play Officially Tomorrow

Future Games Show Will Return in March; Over 40 Games Announced, Including 8 New Releases

Fallout 76 to be Developed Over Five More Years