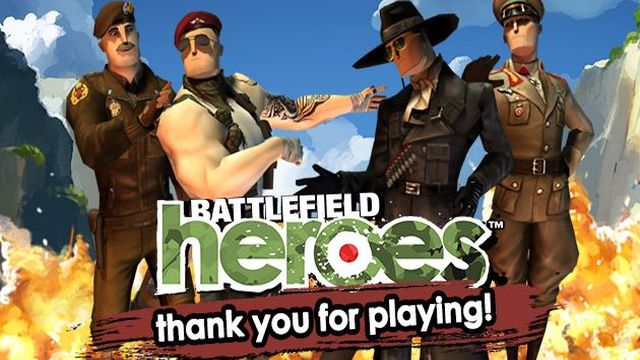 Battlefield Heroes and other free-to-play games from Electronic Arts will soon go offline.

There was a time when Electronic Arts put a lot of emphasis on productions that were made available to players free of charge. The company released a host of free editions of their most famous series; these games differed in terms of quality, but without a doubt they gained great popularity at some point. Soon they will become a thing of the past  the representatives of EA announced that servers of four free-to-play games will go offline on July 14. This information applies to Battlefield Heroes, Battlefield Play4Free, Need for Speed World and FIFA World. It is worth mentioning that the option of buying virtual currency for real money has already been blocked in the first two productions; the same goes for setting up new accounts.

The announcement did not state any specific reasons for this decision. However, in the statement published on the Electronic Arts website, Patrick Soderlund, Executive Vice President responsible for subordinate studios, said that the abovementioned four games are not as popular as they once were. That's why the company's management decided to discontinue their further development. Instead, the game tycoon intends to focus on another free-to-play production which continues to attract new users, namely Star Wars: The Old Republic. More updates and expansions are planned for this production that will be made available in the next few months.

Battlefield Heroes and Battlefield Play4Free are free-to-play editions of the popular shooter series developed by DICE. The former, inspired by the online production Team Fortress 2, was released in 2009. Similarly to the game created by Valve, it is characterized by colorful artwork and humorous approach to the subject.

The latter production debuted in 2011. Unlike Heroes, the game features more realistic graphics. In The combat takes place on fairly extensive maps, and each battle can involve up to 32 players.

Need for Speed World is an online version of the popular racing series. The game using the free-to-play model was released in 2010 and allows users to get behind the wheel of extremely fast cars. Additionally, theres an option of tuning ones vehicles. In the production, players can compete on the streets of cities known from Most Wanted and Carbon.

FIFA World is an online edition of the football series from Electronic Arts, which entered open beta phase in November 2013. The production is based on the Ultimate Team mode, well-known from the paid installments of the series, that allows players to create their own teams composed of different players represented by cards. The gameplay does not boil down to playing matches, but also involves purchasing new football players and exchanging cards with other users.

Sword Coast Legends  Focus on Story Campaign and Other News