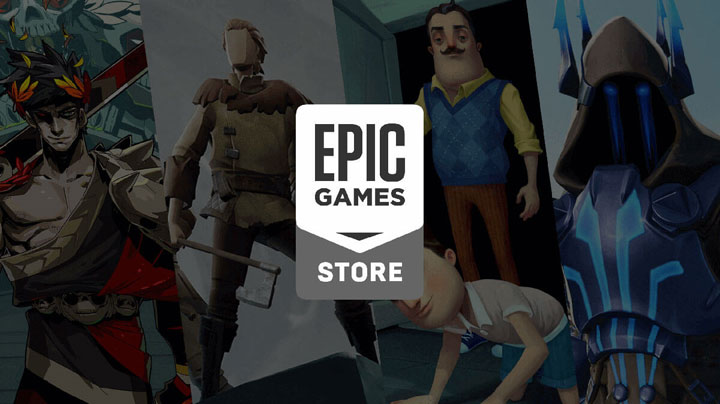 The Epic Games Store offensive has been sparking discussions on all possible message boards around the world for several months now. The new store and its controversial strategy of buying games for temporary exclusivity only on this platform, especially bypassing Steam, has its supporters and opponents, who argue for and against the new approach to competition in the field of digital distribution. Regardless of these disputes, everyone wonders how much it all actually costs. Thanks to the work of one of the users of the ResetEra forum we got to know the approximate numbers. Generally, there is only one conclusion - the whole project has an epic momentum.

Fig is the key to solving the mystery

Some time ago, a Remachinate user invested in Phoenix Point via the crowdfunding platform, Fig. The title's developers, as you may remember, have signed the Epic deal and decided to put up their game on sale on the Epic Games Store in March this year. The exclusivity deal is valid for a year.

We would like to remind you that Fig is a crowdfunding platform, working on slightly different rules than the popular Kickstarter. By investing in the development of a chosen title on Fig, the user becomes a shareholder of the project (in a simplified way) and not only gets a copy after the launch, but also receives a dividend from its sales.

Although Phoenix Point is still a few months away from release and, as a result, not even a single copy of the game was sold, last Friday, Remachinate received information from Fig that their investment has already covered 191% of its expenses. This message, combined with the data provided by Fig, provided a fairly accurate estimate of how much Epic Games has paid for the exclusive right to distribute Phoenix Point.

It needs to be pointed out that the following data comes from the financial reports of the Fig platform for the years 2017 and 2018, as well as from Phoenix Point's investment description page.

Generally speaking, in 2017, developers from Snapshot Games donated $500,000 out of their own pockets and set off to collect another $500,000. It was assumed at the time that 48,033 copies of the game would have to be sold at $34.99 each to have the thing break even. This gives us $1,680,675 in revenue, and after deducting 30% of the revenue share for Steam and another 15% for Fig, we get the amount that was invested - a million dollars. If we now consider that the profit distribution between Snapshot Games on one side and the investor/gamer group and Fig on the pther, has been set at 50/50, and that the investors have just been informed of a 191% return on the half a million they'd invested, they should be paid a total of $955,000. Taking Fig's revenue share into account, we come to $1,123,529, and with Snapshot Games' half of the deal, the final count is $2,247,058. This is an approximate minimum amount that Epic Games paid for the temporary exclusivity of Phoenix Point, as we still have to take into account a number of simplifications in the above calculations, as well as the fact that in 2017, not 500,000 but more than 700,000 dollars was raised. 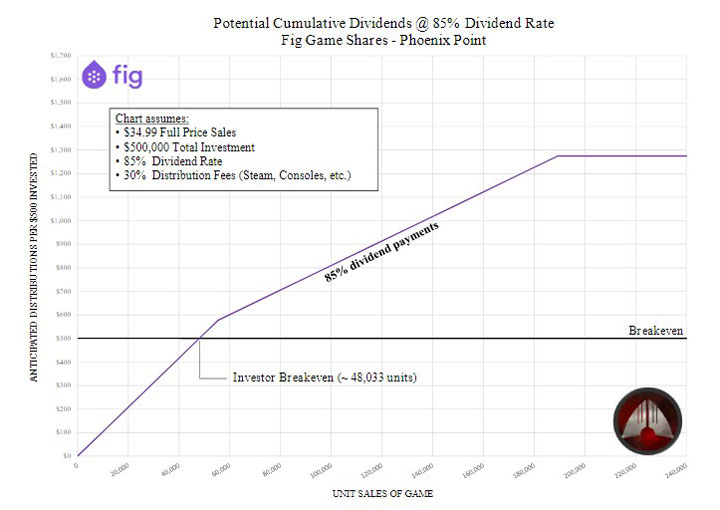 Diagram of potential dividends from investments.

Conclusions and scale of the project

If we take into account the fact that Epic Games has blindly put over two million dollars on the table for a strategy game by a rather obscure studio, whose only guarantee of quality is the presence of Julian Gollop (who created - over two decades ago - games such as Laser Squad or UFO: Enemy Unknown), and look at over twenty more titles taken under the wings of the Epic Games Store, including such famous games as Anno 1800, Metro Exodus or Borderlands 3, we're likely talking about more than 50 million dollars of blind investments. Add to that the extra money that went into giving away games for free through the Epic Games Store and you'll soon fathom the sheer volume of cash being poured into the new project of the creators of the popular graphics engine. Furthermore, we're not talking about a quick and secure return on investment, as we remember that Epic Games only takes a 12% share for the games distributed on its store. To sum it up, Tim Sweeney, the head of Epic Games, pulls no punches, and attacks Steam and the competition very aggressively, definitely counting on long-term benefits rather than immediate profit. 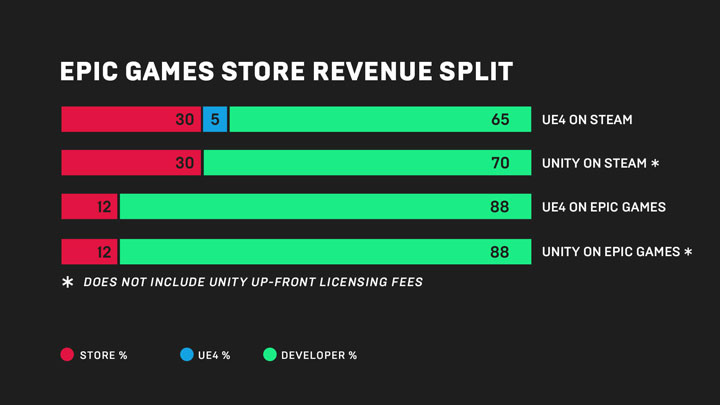 The only inconvenience - customers

The saddest thing about all this is that usually the customers benefit from such a war of market giants. However - what's really interesting - in this case, the battle is not over the customers, but developers. The prices of games on the Epic Games Store are no different from what the competition has to offer, and the number of features offered by the store is very limited. Although the new platform will certainly offer a number of functionalities similar to those found on Steam within a year, we already know that the Epic Games Store will not allow such freedom of expression as the Valve platform. After all, the supervision of the review system will rest in the hands of individual developers, who, in the event of unflattering opinions, will be able to simply disable them.