In May, SCS Software announced that Euro Truck Simulator 2 will see its sixth major expansion. Today, however, we learned that the Road to the Black Sea expansion will debut on PC on December 5, 2019. On this occasion, a pleasant trailer was published, focusing on the presentation of picturesque routes that we will follow.

In Euro Truck Simulator 2: Road to the Black Sea, developers will enable us to travel more than 10,000 kilometres of roads through countries such as Romania, Bulgaria and Turkey (to be precise - its European part). Twenty big cities, beginning with Istanbul, as well as numerous "landmarks" and an eye-catching rural areas with their characteristic Balkan architecture, will be waiting to be visited. Apart from other cars and trucks, on the roads we will encounter trams (in cities) or even horse carts (which are part of the rural landscape in Romania and Bulgaria). The list of attractions will also include crossing the Danube on board of a ferry and border controls. All this will be complemented by a set of fresh achievements.

As you can see, despite the fact that more than seven years have passed since the release of Euro Truck Simulator 2, the work of SCS Software still holds its own really well and tempts players with new content. Due to the popularity of this title, it is not surprising that instead of spending time creating the third part of the series, the devs prefer to expand it and gradually refresh its appearance. 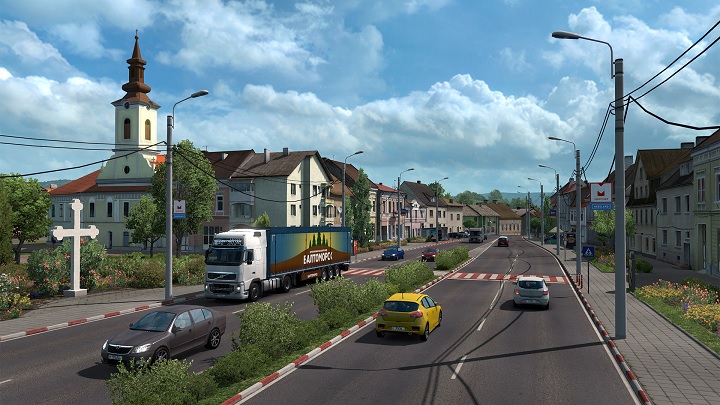 The sun is shining, the birds are singing, the picturesque town in front of us... Yeah, I could drive like this until I die!
video gamesDLC and expansions release dates / delays (games) trailers (games) SCS Software car simulators truck simulators Truck Simulator (series) PC