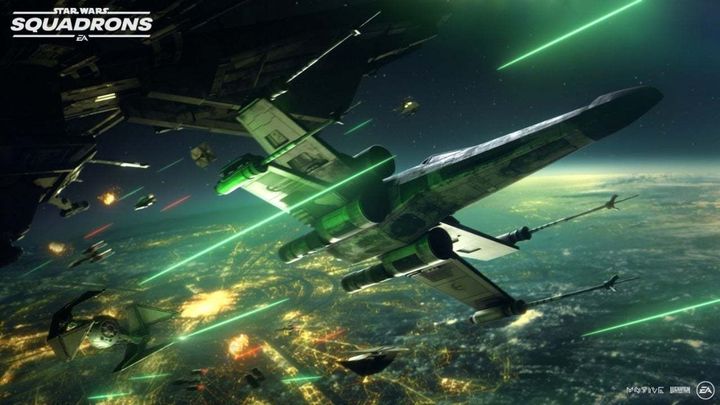 Star Wars: The Squadrons looks like a tasty morsel for fans of the universe.

Tomorrow marks the release of Star Wars: Squadrons, a space fighter simulator set in the Star Wars universe, developed by Motive Studios. The title will be available on PC (priced at $39.99 on Steam) and PlayStation 4 consoles ($39.99 on PlayStation Store) and Xbox One ($39.99 on Microsoft Store). We already have the first reviews of the game.

It seems that Star Wars: Squadrons is a well-made game that perfectly reflects the atmosphere of the universe and offers well thought-out, rewarding gameplay. Some reviewers point out that it's a title for somewhat limited audience, but those who dream of sitting at the helm of a Star Wars space fighter should definitely have fun playing it.

"It encapsulates everything that makes those epic dogfights from the movies so magical, and puts you right at the heart of it. From throwbacks to particularly iconic moments to the wailing scream of a TIE Fighter at speed, its all here and it all looks and feels fantastic," said Chris Jecks from Twinfinite (rated 4.5/5).

"Star Wars: Squadrons offers an exhilarating take on dogfighting in a galaxy far, far away, which helps elevate a functional single-player story and provides a strong foundation for a focused multiplayer experience," writes Ben Tyrer from GamesRadar (rated 3.5/5).

"After all is said and done, Star Wars: Squadrons is a highly-anticipated space shooter with careful workmanship and respect for the source material... It's a success, nothing more, nothing less," writes Silent_Jay, Jeuxvideo.com (rated 16/20).

On Metacritic, the game currently has an average rating of 78-81% (depending on the platform, but the PC version is rated highest). In the case of OpenCritic the situation is similar (the average is 80%, while 71% of critics consider the title worthy of recommendation).

Our review of Star Wars: Squadrons will appear on the website in a few days - we want to spend some more time evaluating the multiplayer mode.