Today will see the release of update 19.10 to Fortnite. The developers have already started disabling matchmaking and any moment now the servers will stop working. The break in the fun is expected to last a few hours.

This will be the first major update since early December last year, when patch 19.00 launched the third chapter of the game. Then, in the middle of last month we received patch 19.01, which introduced the Christmas event. The other updates were technical in nature and did not bring any fresh elements, so the fans are hungry for new features. 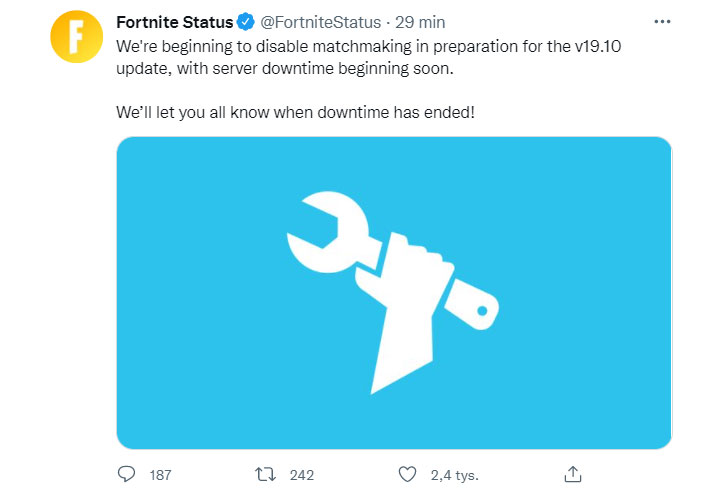 No official list of changes has been made available yet, but we already know what 19.10 will probably offer. The official Twitter account of the game published an entry with the icon of towers, confirming information found in the files by fans about the return of the well-known location Tilted Towers to the map. There will also be a location called Convert Cavern or Convert Canyon. In addition, the game will probably add smiling dinosaurs (the so-called Butter Cake Dinosaurs), which were teased in earlier materials.

The appearance of grenade launchers is also expected, although it is not entirely certain that it will happen in today's update. It is possible that we will receive this type of weapon only in a smaller patch next week. In addition, fans are expecting three new NPCs to appear on the map. Information found in the files suggests that they might be related to Spider-Man.