The Sims is a series that is primarily associated with a sandbox experience. The game enables us to create a fictional family (or single characters), whose fates we then manage at our own discretion. Players have always created the story of their characters themselves, and The Sims was not known for having a story campaign.

At some point, however, this began to change. For example, the StrangerVille DLC featured a modestly sized storyline and associated quests. One of the job offers published by Maxis suggests that this idea will probably be developed further in the future. It would agree with the earlier actions of the creators, who decided to develop the story of independent sims. 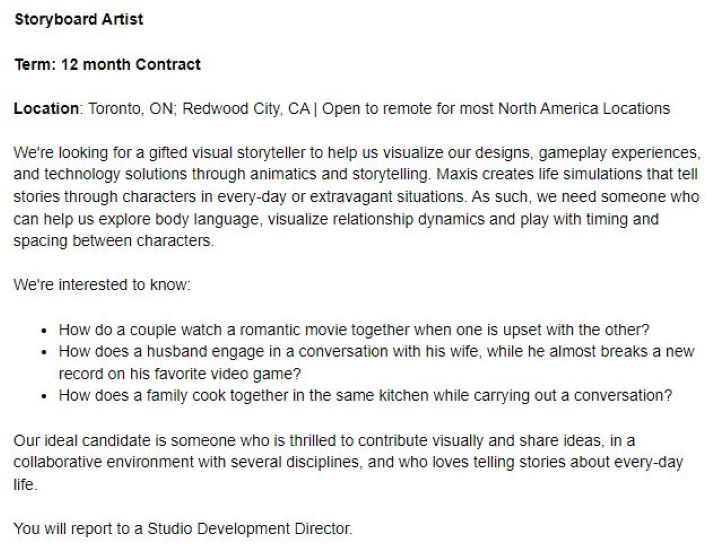 The company was looking for an employee for the position of Storyboard Artist. The job description announces that this person would be responsible for designing cinematic cut-scenes that would portray the dynamic relationships of the sims. This employee would have to skillfully present the feelings of the characters and know the rules of proper composition of scenes involving multiple characters.

The offer also included examples of situations that would require appropriate staging. For example, a romantic movie night, where one person is offended by another. Another scene would include a family conversation while preparing food.

Of course, neither EA nor Maxis responded to speculation that began circulating in the community associated with The Sims. It's hard not to notice, however, that the conclusions from the above job offer are obvious. It is possible that in the future fans of Sims will be able to follow full-fledged storylines. Unfortunately, we will probably have to wait a lot of time for official information on this subject.