Playground Games has reasons to be happy. Forza Horizon 5 has already been played by over 6 million people. It doesn't mean, however, that each of these players bought their own copy. The game is also available as part of the Game Pass subscription. Despite this, the result is very impressive.

Recall that the game launched on November 9 on Xbox One, Xbox Series X/S and PC. In fact, many players began playing as early as November 5, because that's when the early access for owners of the Premium edition began. Over 800,000 people took advantage of this option, which is an impressive result, taking into account the fact that this edition is expensive, and on Game Pass you have to pay extra to unlock it, buying the so-called Forza Horizon 5 Premium Pack. 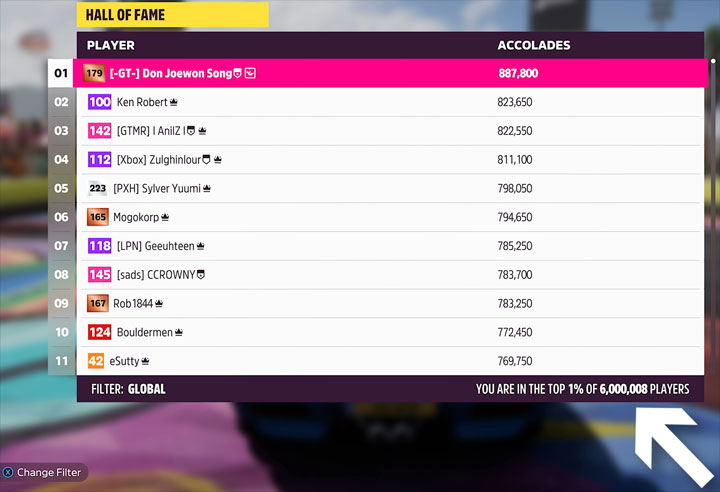 The number of players can be viewed in the rankings available in the game. Screenshot source: Don Joewon Song.

All this shows that the game's release was awaited by a lot of people. Preorders of FH5 were the biggest bestseller on Steam last week. On November 10, the day after the release, head of the Xbox department Phil Spencer boasted that the title was played by over 4.5 million people. That's the highest number in the history of games released under the Xbox Game Studios banner. Now we know that since then another 1.5 million players have joined the game.

Forza Horizon 5 also achieves impressive results on Steam. Yesterday, at the hottest moment of the day, 80,859 people played the game at the same time. This is the best debut in the history of racing games on this service. The only production from the genre that has ever topped this result is F1 2015 (88,029 simultaneous players), but it was established at a time when the game could be obtained for free. FH5 has, by the way, a good chance of beating this result in the coming weekend.

The results on Steam are even more impressive, because the game is also available in Game Pass and in Microsoft Store. Buying the game there gives us access not only to the PC version, but also to the Xbox One and Xbox Series X/S editions.

Obsidian Said to be Working on Detective RPG Pentiment