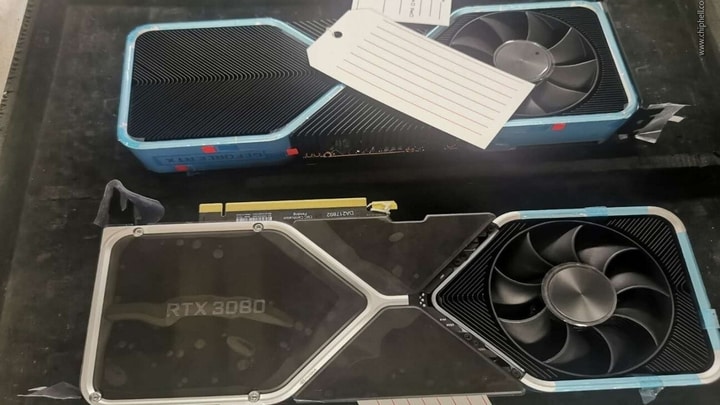 It is suspected that the card presented in the picture is the Founders edition.

ChipHell message board user posted images which, he claims, show the GeForce RTX 3080 GPU. We mentioned leaks about the specs of RTX 3080 and 3070 earlier this year. Are the subsequent leaks of Nvidia's gaming GPU heralding its imminent release?

The front of the GPU (photo: TechPowerUp)

In the picture below we see two fans, each of which is located on the opposite side of the device. The heat sink, which has been specifically curved in the design, probably to improve airflow, also takes care of cooling, with the help of an unusually designed printed circuit board (PCB). A V-shaped cut-out is easily visible on the back of the unit. This has enabled the developers to save some space and place the fan properly. As for the appearance itself, the color of the card is not blue - it's just the foil.

Back of the presented graphic card (photo: TechPowerUp)

It is worth remembering, that this is unofficial information, so we should take it with a grain of salt. However, if we were to assume that the pictures are true, most likely athe card with such visual qualities would come from the Founders edition, which would also mean a higher cost compared to the Standard version. To find out more about the new Nvidia cards based on Ampere architecture, we will have to wait a bit.

Chernobyl Director Aboard The Last of Us TV Series

Chernobyl Director Aboard The Last of Us TV Series

New Rumor Suggests Bloodborne PC is in the Works

The Uncertain Last Quiet Day For Free on Steam