At a presentation during the virtual GPU Technology Conference event (GTC 2021), Jensen Huang, CEO and co-founder of Nvidia, shared the company's plans for the coming years. While consumer GPUs weren't the main topic, there was a mention of GeForce RTX 3000's successor, which is what gamers are most interested in. The Ampere Next, implied to be the GeForce RTX 4000, will debut in 2022 (we're betting on the second half). 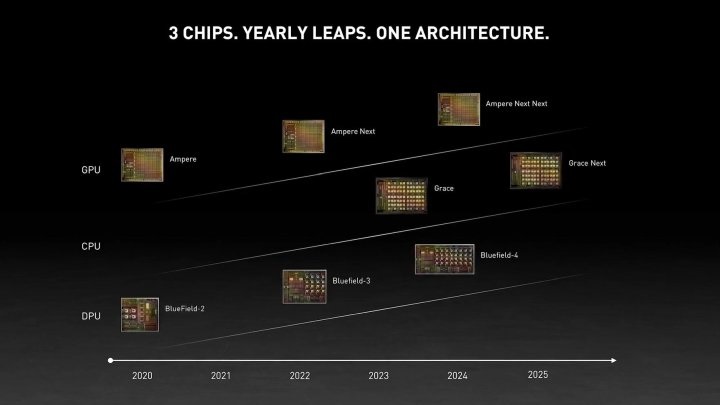 Here's Nvidia's official roadmap until 2025 - we're supposed to get two more generations of GeForce RTX graphics cards (presumably the 4000 and 5000) within three years.

According to earlier, although unofficial reports, the successor to the Ampere architecture - used in Nvidia's current generation of GPU - is to be produced in a 5-nanometer technological process Nvidia Lovelace (instead of Nvidia Hopper, which in turn will go - according to the latest roadmap - to SoC ARM units designed for advanced calculations associated with artificial intelligence, among other things). Hopper is named after Ada Lovelace, a prominent British mathematician and daughter of poet Lord George Byron. She is considered the first female programmer - she became famous for developing a computer algorithm for Charles Babbage's analytical machine.

The full AD102 chip could have as many as 18,432 CUDA cores (almost twice as many as in RTX 3090 and RTX 3080's GA102), and its single-precision computing performance would be expected to reach a monstrous 66.4 TFLOPS at 1800 MHz (impressive compared to GA102's 38.7 TFLOPS). Moving to a lower technological dimension should therefore translate into a significant increase in performance and better energy efficiency. It's no coincidence that such a number of CUDA cores appeared in the RTX 4090 model presented as an April Fool's joke. What's interesting, a suitably adapted graphics chip based on the Lovelace architecture would also be found in the Nintendo Switch Pro console with support for Nvidia DLSS technology, which has been rumored for quite some time.

It remains to be hoped that the market situation caused by the coronavirus pandemic will improve by the second half of 2022 and the release of GeForce RTX 4000 will not be as "paper" as Ampere's RTX 3000. Nvidia has also officially confirmed that it intends to release the next generation of GPUs every two years. The next architecture, hidden under the name Ampere Next Next, is expected to appear in 2024 (GeForce RTX 5000?).

Cloud Chamber is Looking for a Writer for BioShock 4