The last several months have been a real nightmare for people looking to buy new computer hardware. Shortages have hit the gamers at every turn, and buyers looking for smartphones, laptops, etc. are no strangers to shortages. These problems have also affected the financial results of GPU manufacturers - except Nvidia, which has had a very good quarter.

Jon Peddie Research analyst group has released a report on the health of the GPU market. For Intel and AMD, the third quarter of 2021 was disastrous. The manufacturer of Radeons sent 11.4% fewer GPUs to stores than three months earlier. In the case of Intel (the data includes integrated cards), the decline was even greater, as much as 25.6%.

And what about Nvidia? Not only did it not report losses - the company shipped more cards to vendors than in the second quarter (up 8%). Considering the company's dominance in the GPU market (vide Steam's latest hardware survey), we can assume that it is to their products that we owe the year-on-year increase in GPU sales. Recall that recently Nvidia reported record revenue in the third fiscal quarter (i.e. the period from August to October), which increased by half compared to last year.

What's more, after narrowing the data to dedicated PC graphics cards, it turns out that 10.9% more units were shipped to stores than in the previous quarter. 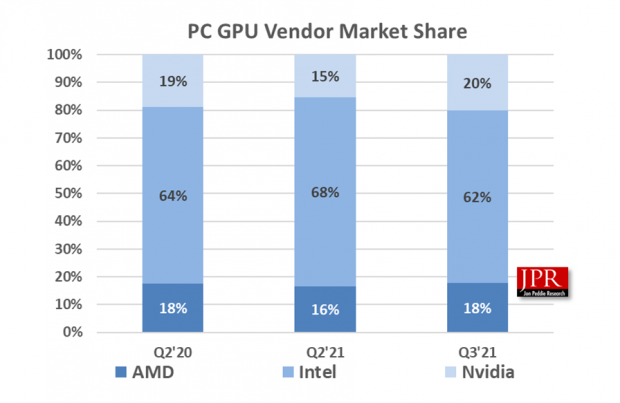 This does not change the fact that in the third quarter the situation in the GPU market was much worse than in the second quarter, which is an exception. Over the last 10 years, the average decline in sales (i.e. GPUs shipped to stores) has been 5.2%. Now it's 18.2%. The report also mentions similar problems in the PC CPU (-23.1% quarter-on-quarter, 9.2% year-on-year) and tablet (-6.9% compared to Q2) sectors.

As you can see, Nvidia's success is an exception in a market clearly suffering from supply issues. Sony, Intel, Valve, Nintendo and even Apple are all struggling. Unfortunately, John Peddie - CEO of JPR - echoed what many electronics manufacturers have been saying: "there's no hope of stabilizing supply chains before the end of 2022."