With the year coming to a close, Stream Elements has shared their yearly stats on Twitch. The most watched game of 2021 was Grand Theft Auto V, whose viewers spent 2.1 billion hours watching the game. This is an amazing result, considering the fact that the game was released in 2013. Just behind GTA V we have League of Legends with 1.8 billion watched hours and Fortnite with one billion hours spent in front of the screen by the viewers. 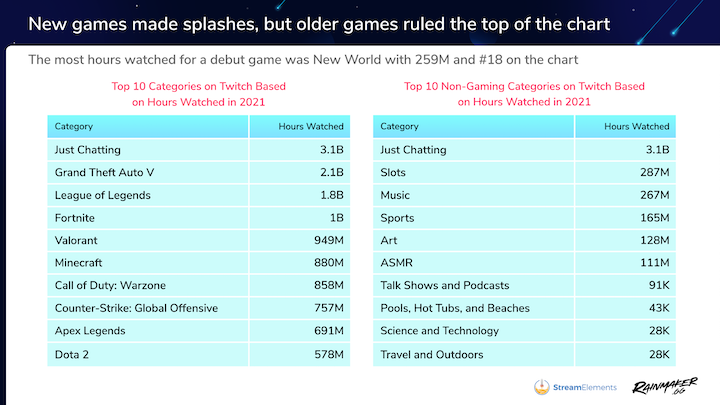 GTA V owes its success to the continued support of its creators. What ensures the title's record-breaking popularity on streaming platforms is the online mode, which received a new update featuring a guest appearance by Dr. Dre this month. People are delighted with the multiplayer mode, which provides a variety of entertainment options (the role-playing option is particularly popular). There are even dedicated servers where popular streamers live out their fantasies, taking on different characters and entertaining their viewers.

GTA V has been supported for 8 years and has lived to see many ports. The game was originally released on PS3 and Xbox 360, before being ported to the current last-gen consoles and will be coming to PS5 and Xbox Series S/X in March 2022.

Despite the immense popularity of Grand Theft Auto V the series has also suffered a few setbacks. Just look at the recently released GTA The Trilogy: Definitive Edition, which received very poor reviews, or the fact that fans still have not lived to see the announcement of the next installment.

How Much For All Games From Steam Winter Sale 2021?