I bring bad news for fans of the Final Fantasy series who are waiting for its 16th main installment. This morning Naoki Yoshida, the game's producer, announced on Twitter that due to a coronavirus pandemic, the title will be delayed for almost six months. News about the game, which - as promised - were to be announced this year, will be revealed next spring. 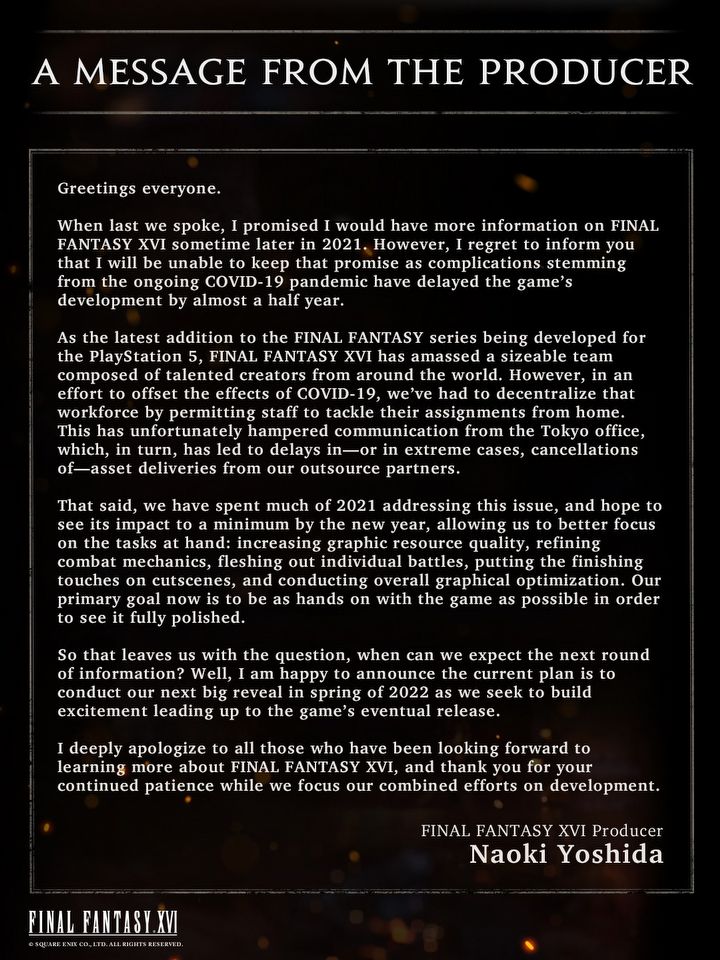 The creation of the 16th game was especially affected by remote work. Yoshida stated that content prepared by external partners was created much slower than expected, and some of it had to be cut. This doesn't mean that Final Fantasy XVI will be truncated; Square Enix simply had to find a way to solve the problem and produce the game more efficiently.

The developers' plans for the near future include improving the graphics, polishing the combat system, including specific - probably story-related - battles, polishing the cutscenes and optimising the game as much as possible. In general, the developers want Final Fantasy XVI to be fully ready for the release, the date of which, however, they are still unable to give. We can assume that the game's debut will take place no earlier than at the end of 2022, and perhaps even later.

Yoshida apologized to fans on behalf of the entire team and thanked them for their continued support and patience. Recall that FFXVI will probably be released first on PlayStation 5, and only later on PC. If you're curious about the information revealed so far about the game world and characters, I refer you to this message.

Titanfall 2 Saved by Fans Thanks to Mod Called Northstar

How Much For All Games From Steam Winter Sale 2021?