Crazy heroes of League of Legends in Riot Games' explosive single-player game - Hextech Mayhem: A League of Legends Story has just been announced. In the production we will play as Ziggs, a demolitions expert, and blow up the city of Piltover to the rhythm of music.

Hextech Mayhem: A League of Legends Story is a rhythm runner, in which we will perform actions in the rhythm of music while constantly moving in a given direction, and each will result in an explosive reaction. While controlling Ziggs, we'll take advantage of the "Unstoppable Mayhem" mechanic, thanks to which there'll be even more uncontrollable explosions and bonus points to gain on the map. The game will also feature the eccentric scientist Heimerdinger, also known from the world of Runeterra, but his role in the new production remains unclear. Will the characters cooperate, or will they focus on competition? We will find out soon.

The Choice Provisions studio, known for the Bit.Trip series and Runner platform runner games, is working on the title. As you can see on the attached trailer, the mechanics of Hextech Mayhem will be an expansion of the studio's previous achievements.

Riot Games continues to expand the League of Legends brand into other video game genres. After an auto battler production (Teamfight Tactics) and a digital card game (Legends of Runeterra), we get the rhythm runner Hextech Mayhem and one more single player game is waiting for release - Ruined King: A League of Legends Story. Let's also remember that recently an animated series Arcane premiered on Netflix, whose main characters are the sisters Jinx and Vi. 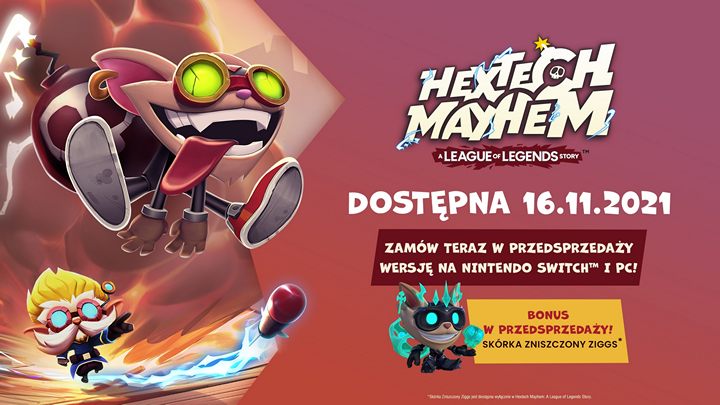 Hextech Mayhem: A League of Legends Story will debut on November 16 on PC, Nintendo Switch and Netflix. Those who choose to pre-order the game will receive an additional skin.