If you were hoping for some big news on Bayonetta 3, then Hideki Kamiya, the creator of the franchise and one of the co-founders of PlatinumGames, has a bucket of cold water for you. He gave an interview for Video Games Chronicle along with the studio's other co-founder, Atsushi Inaba. The conversation was about the plans for 2021, so it couldn't do without the question about the third installment of the adventures of the brave witch. Kamiya, who is also responsible for the first installment of Devil May Cry, says that fans should forget about the game for a while, and at the same time, a moment later, he heats up the atmosphere.

"It’s January. We’ve got to have something come out, right? I guess it’s safe to expect that something will come out. There’s still a lot of the year left."

When asked if it will be something other than an art showing the logo, Kamiya replied:

"(Laughs) I understand it’s driving the fans crazy! In light of that, my suggestion would be that maybe we should all reset and forget about Bayonetta 3. Then when something finally does happen, it will be a nice surprise, won’t it?"

The devs were also asked about the upcoming project under the working name G.G. In February it will be a year since the first trailer appeared. Since then, the devs haven't presented any details. All that is known is that it will be Hideki Kamiya's third superhero game after Viewtiful Joe and The Wonderful 101. The latter title received a remaster last year, which was published by PlatinumGames without the help of another studio. The same will be the case with the upcoming game.

"Inaba: we definitely want to have a closer interaction with our fans and so we’re hoping to get to that development style where we can share things as we move along.

Kamiya: Also since we’re self-publishing, there are no publishers to get mad at me this time, so I’ll be sharing things online, putting up screenshots whenever I like…

Inaba: I’ll get mad at you! [...] So if there is a difference between what we want to do with Project G.G. versus what we normally do with our other titles, it’s not really a criticism for those publishers: we respect their approaches. But for this title especially, our approach as a company is that we’re hoping to be more open." 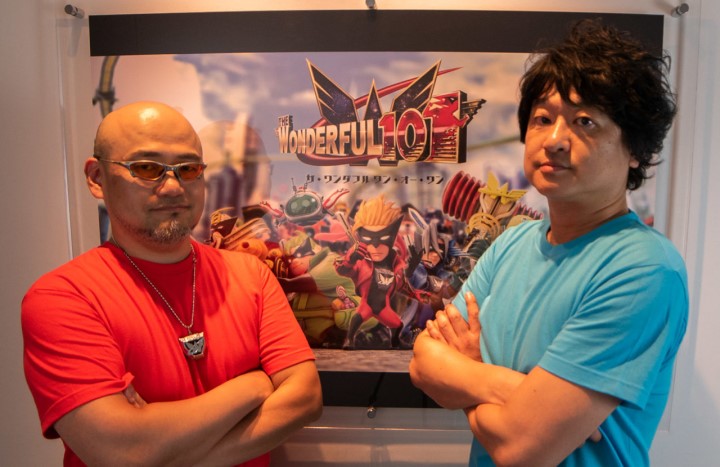 One of the important points that were brought up in the interview was the recent decision made by Sony. The company has changed the functionality of the two buttons on the PlayStation 5 controller. Until now, the players in Japan confirmed their choices with the wheel, while the "X" button was used to cancel. From now on it is the same as in other countries around the world. Kamiya, who is known for his uncompromising approach (although he says he holds no grudges against any major company and is opposed to console wars), commented lively on the change.

"To me, this doesn’t feel like a Japan versus US thing – my pride isn’t hurt as a Japanese person – it’s just more that there are two camps who had two ways of doing things, and I think they’ve short-sightedly leaned one way. I don’t understand the reasoning behind that. To clarify, if it had been the opposite way around and they had made the world use circle for select, I think I would’ve felt the same way. It’s just a little bit of disrespect towards the gaming cultures that have existed for decades now as part of so many peoples’ lives. I feel like PS5 has disrupted that and I don’t know if it was meaningful to do that."

In addition to Bayonetta 3 and the game hiding under the codename G.G. PlatinumGames is also still working with Square Enix on Babylon's Fall, which was announced in 2018. The year 2021 will undoubtedly be a busy one for the team.

Hitman 3 Will Get DLCs With New Jobs, But Not Maps