SEGA revealed that the launch of Humankind, a historic turn-based 4X strategy game, will take place in April 2021. Unfortunately, the exact release date was not given - it will probably be known in the coming months. The game was originally scheduled for release in 2020, but SEGA, its publisher, announced a delay in June. We didn't know the exact date until now. Studio Amplitude, the creators of the Endless Space series , also revealed the system requirements of the PC version on Steam, which are as follows:

Also pre-orders for Humankind launched today. Suggested price of the game was set at $59.99. You can pre-order it on Steam, Google Stadia and Epic Games Store with 15% discount ($50.99). For now, only Digital Deluxe edition is available in the stores, which includes, apart from the game, digital versions of the soundtrack composed by Arnaud Roy and a poster with technological trees and units, as well as Notre-Dame DLC package, which includes avatars (e.g. with Victor Hugo) and a cathedral with a special event to use during the game. After placing a pre-order, we will additionally receive a set of avatars with queen Boudica and unique symbols and decorations. 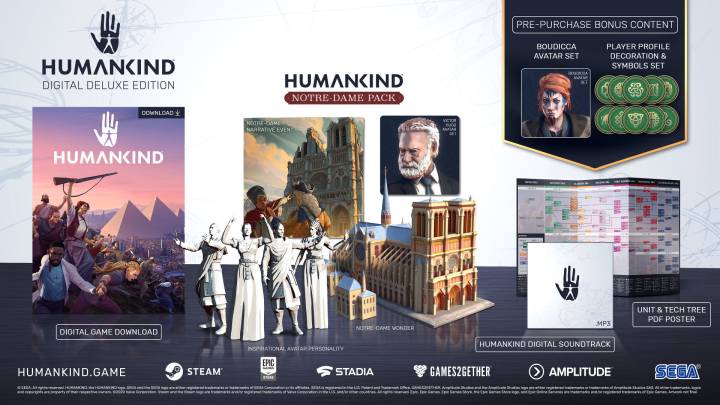 These are the elements that are part of the Digital Deluxe edition.

Humankind will launch exclusively on PC and Stadia. Google's platform offers the opton to test a special beta version of the game (the so-called OpenDev scenario) for free. It enables us to play 100 turns and lead the Nubians in ancient times or the nation of our choice in the so-called classic era.