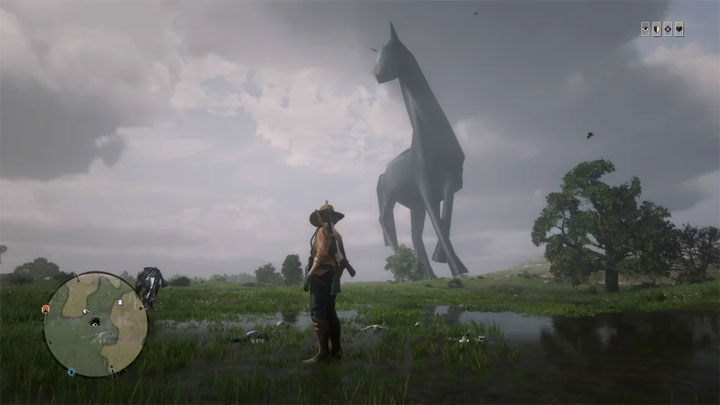 It's been ten months since the release of the full version of Red Dead Online, the online module for Red Dead Redemption 2, and yet there are still some funny technical issues. One of them, causing the appearance of giant horses, and user DestructingBeauty has come across one of them.

As the user explains, he was quietly hunting ducks in RDR Online, when suddenly he bumped into a giant steed, which after a while disappeared in the air. Shadow of the Colossus fans may have some flashbacks, but for the rest of the players, it will probably be just a funny bug. Less funny is the fact that it was caused by a technical error that has been known for a long time.

Videos with giant horses appeared as early as October last year, and yet the bug that caused them has not been fixed by Rockstar Games to this day.

As a reminder, Red Dead Redemption 2 was released on October 26, 2018 on Xbox One and PlayStation 4, and on PC at the end of last year - first through Rockstar Games Launcher and Epic Games Store and a month later on Steam.

Red Dead Online, the game's multiplayer module launched on consoles in May 2019, after many months of beta-testing. On PC, multiplayer gamplay wes made available with the release of RDR2 port on PC.

As it was the case with Grand Theft Auto V, Rockstar Games decided not to create any story expansions for Red Dead Redemption 2. The team prefers to focus on developing Red Dead Online.

Gamepressure receives commission from the shops whose offers are presented on our website. However, we make every effort to choose only interesting promotions - first of all we want to publish the best offers for equipment, gadgets and games.