It seems to be a matter of time before Microsoft officialy confirms its plans to release the Xbox One S console in the All-Digital version, i.e. without a Blu-ray disc reader. We wrote about this possibility a month ago, and now the German website WinFuture has published pictures showing a device without a optical drive. Editors of the website claim that the Redmond giant will reveal the latest edition of its console on April 16. 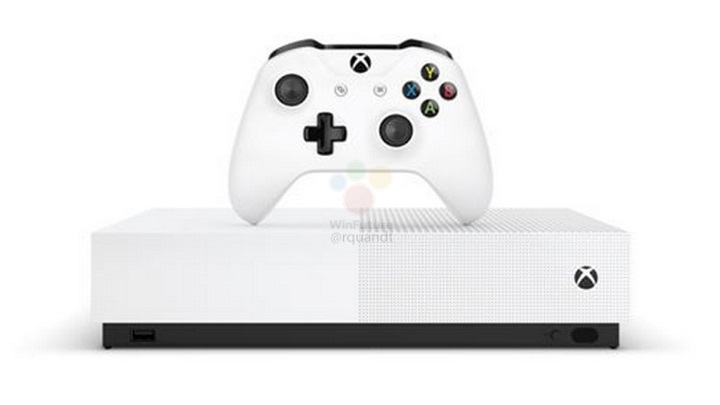 Apart from the lack of a reader, the new version of Xbox One S visible in the photo does not differ from the original. / Source: WinFuture.

The Xbox One S All-Digital would hit the stores in Europe in less than a month later, on May 7, at a price of 230 euros (around $260), which is around 40 dollars cheaper than the regular Xbox One S in the official Microsoft store. The console would make up for the lack of a Blu-ray reader with a 1TB hard drive and three pre-installed productions - Minecraft, Forza Horizon 3 and Sea of Thieves. Apart from the removal of the optical drive, the console has not changed at all - which may be a little disappointing for those who were hoping for a slightly more compact piece of hardware.

These reports were not, of course, confirmed by Microsoft, but launching a platform that would allow exclusive use of digital distribution would definitely fit in with Microsoft's trend to move away from traditional boxed versions of games. Sales of physical editions decrease year on year, while the popularity of such subscriptions as Xbox Game Pass is growing. And while it's hard to imagine a company completely giving up Blu-ray readers on its ninth-generation console, the company is clearly preparing itself and the gamers for a world of interactive entertainment where discs will become a relic of the past.