The ongoing court battle between Apple and Epic Games has become an opportunity to learn many secrets of the gaming industry. Every now and then documents submitted by the parties are leaked and it turns out that they hide a lot of interesting facts. One of the fruits of this has been the discovery of information suggesting that the PC versions of Dead Island 2 and Saints Row 5 will be released exclusively on Epic Games Store. It's probably just temporary exclusivity, so a year after release they should hit Steam as well.

The source of these reports is a list of game included in the documents, indicated by PC gamers as the most anticipated in a survey conducted in 2019. The image is of poor quality, but it shows that Dead Island 2 and Saints Row 5 are among the marked titles exclusive to Epic Games Store.

As you may remember, we still do not know the release dates of these two games. We know learned that they are in development. 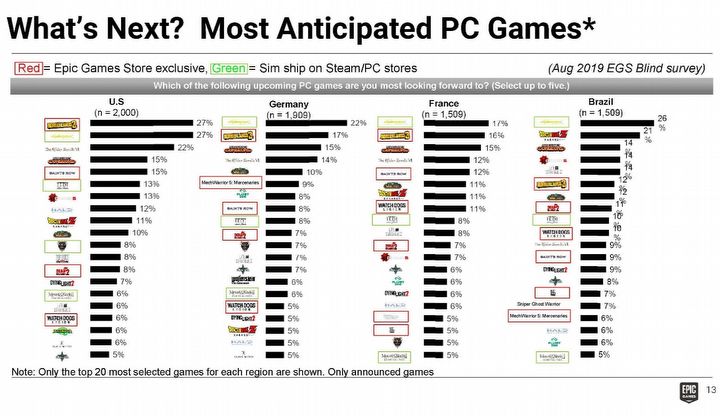 Both Dead Island 2 and Saints Row 5 will be published by Deep Silver. The publisher has already signed similar agreements, as a result of which the PC versions of Shenmue III and Metro Exodus were available exclusively on Epic Games Store for the first year after their release. The company must be satisfied with the results of this cooperation, if it intends to continue it. Of course, we should take into account the possibility that both parties have changed their minds since the document was created.

It is worth noting that not all Deep Silver's games debut as exclusive on EGS. Steam users did not have to wait longer for, among others, Iron Harvest, Windbound, Relicta or Gods Will Fall. The same will happen in the case of King's Bounty II.

It should also be noted that Epic Games is studying what games PC gamers want most, and then trying to get temporary exclusivity for those titles. It's a good tactic, but its effectiveness is limited by the unpredictability of the PC market. In 2020 and 2021, the big hits on Steam were often completely unexpected titles, such as Among Us, Fall Guys: Ultimate Knockout or Valheim, whose huge successes came out of the left field.

New Fable Will Be Powered by Forza's Engine