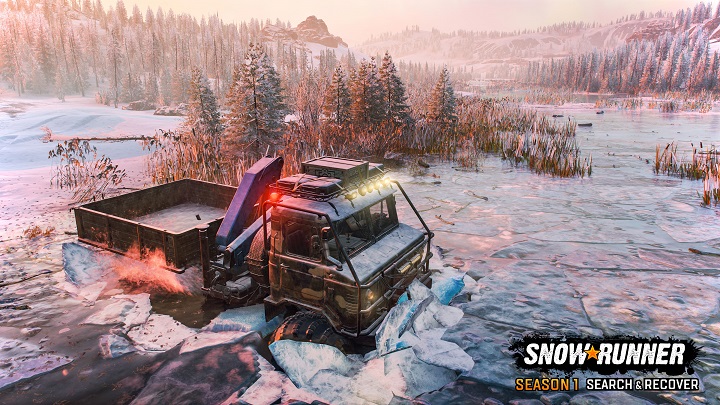 The first season of SnowRunner will launch in a few days.

The first season of SnowRunner, titled Search & Recover, will launch on July 15. It will introduce several new features, including a snowy map in Russia and vehicles. Additional content will be made available for free to owners of the season pass and premium edition of this title, but can also be purchased separately. There will also be free content (mainly missions), for those who still want to have fun in the base game. Thanks to the co-op mode, the players without access to the first season will be able to check its content by joining the fun with a friend who has it.

The first season will also bring new gameplay mechanics, which will force virtual truck drivers to take a slightly different approach to the tasks. On the snow-covered map we will encounter an icy lake, which will have to be navigated extremely carefully (an example can be found below), and a new device called "Prototype Exploration Unit" will be waiting to be discovered to help us explore icy areas.

By the way, the previous installment of the series - MudRunner - will launch on July 15 on Android and iOS mobile devices.

And at the very end we leave you with screenshots advertising the first season of SnowRunner. Selected images can be found below, and a full list of features can be found here.