New World is no longer doing as well as it was just a month ago, when it was breaking popularity records. The reasons to complain are piling up, and players are voicing their displeasure on the forums, as in the case of the latest update, which raised the difficulty in an unsatisfying way. This, however, is not the only problem that has been noticed by the players recently. And it seems to be a serious problem - quite a few people say that there's simply nothing to do in New World's endgame, especially when you play solo.

As noted by Reddit user Sans_19, after reaching experience level 60, the only thing available to solo players in New World is boredom.

"There are no endgame activities than can be done solo.

The only thing that could be done was points of interest. Since the last update you can't even do those because everything takes so long to kill, you just get gangbanged by everything respawning around you."

Among the commenters below this post you can hear voices that agree with Sans. Many Reddit users admit that, like him, they played in New World solo and after reaching level 60 they finished their adventure. This is described, for example, by user BeautifulSparrow,:

"Yeah I ended up quitting. I wanted 60 so bad. Got it... found out I couldn't really do anything besides crafting alone.

"Endgame for a solo player in New World feels a lot like Rust solo, you see everyone else having fun in large groups but you just end up gathering wood and rocks cuz what else can you do,"

Endgame boredom may be another reason for the waning number of active players in New World. Despite having more than 170,000 people playing the game in the last 24 hours, it's hard not to notice the downward trend. 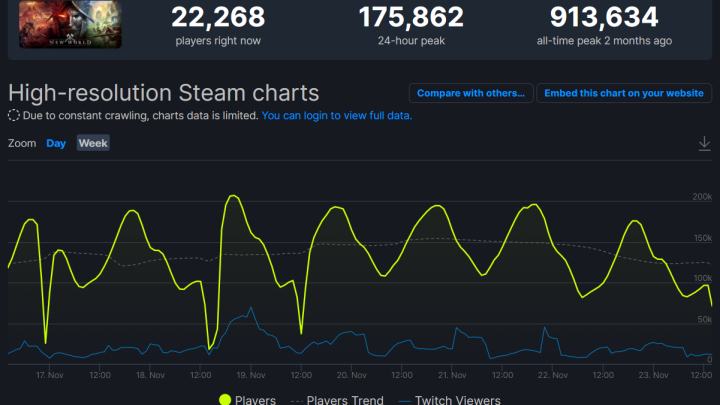 Amazon Games is going to need something to finally address the needs of players. For now, the game gets updates that don't improve little, and such an important aspect as endgame seems to have been neglected.

Terminator: Resistance Will Get a Story DLC; Watch Atmospheric Trailer