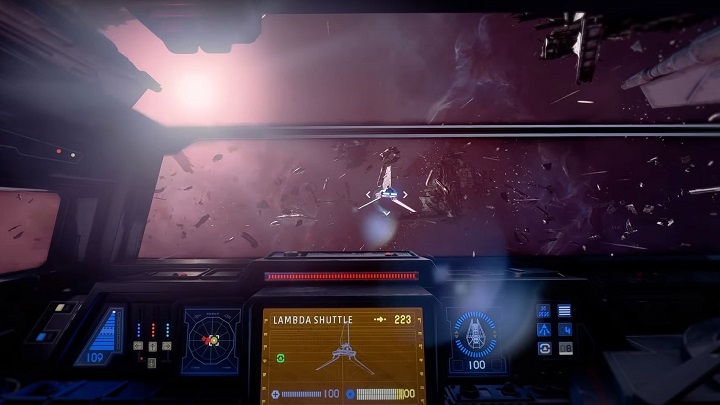 Yesterday, we had a chance to see gameplay fragments from the recently announced Star Wars: Squadrons. It was also then that we got to know the game's release date and found out that it will offer cross-play. Thanks to an interview with the game's creative director, Ian Frazier, published by GameSpot, fans have the opportunity to learn some important details about the gameplay in Squadrons. One of the most important information is the fact that only the first-person view mode will be available in this title.

"The whole game is designed from the ground up to be first-person all the way through. Now if you're in spectator mode, you're observing, there's a third-person perspective there. You are the pilot. All the diegetic information is built into the hud, so you could turn off all the game layer UI if you want and rely entirely on your instruments. We want that to be the core experience."

Creating a game this way obviously involves a few problems. The ships of the Empire and the Rebellion differ in appearance and cockpit layout. For example, X-Wing pilots have a much wider field of view than those of TIE fighters, where the canopy is small. So it would seem that some players may have an unfair advantage in this case.

However, Frazier explains this by the fact that e.g. due to the lack of shields, TIE fighter pilots will not have to worry about managing them, which will enable them to operate more efficiently in other areas. Thus, we learned that in combat, players will be able to direct power to various sub-systems of the ship (including weapons or shields), thus gaining advantage in one field, but losing in another. This is to allow for a more tactical gameplay.

More information about Star Wars: Squadrons can be found in the interview. Let's recall that the game will be released on October 2, 2020 on PCs, PS4 and Xbox One. Recently we learned that the game will support classic joysticks used in flight simulators.