Released in late 2019 on Nintendo Switch - and a year later on PC as well as Xbox One and Series X|S - the exploration adventure game The Touryst has recently received ports on PS4 and PS5. Interestingly, it is thanks to the latter that the game will go down in history as the first console title running in native 8K resolution while maintaining a constant 60 fps - or 120fps in 120Hz mode.

Digital Foundry confirmed that the PS5 version is rendered in native 7680x4320 pixels - with no temporal smoothing, image reconstruction or checkerboard scaling. Unfortunately, the developers have run into a "small grande problema". The PlayStation 5, despite proudly displaying the 8K logo on the box, does not support 8K over HDMI 2.1 at this time. Shin'en (the game's developers; they've done tech demos in the past, mostly for Nintendo) got around this by using supersampling-based anti-aliasing.

In short, this means that every pixel you see on a 4K TV is downsampled from four base pixels, resulting in pristine image quality (on an 8K TV, on the other hand, such "reduced" native image will be upscaled to the screen resolution). A simple patch from Sony should enable the games to run a 4320p frame buffer directly for 1:1 pixel matching on an 8K display.

Users who don't need such a high base resolution can turn it off at any time using the anti-aliasing option in the game menu - gameplay will then be rendered in 4K, which in theory may result in slightly lower console temperatures and power consumption, as well as a slight degradation of the title's visuals. The Touryst's graphics are made up of blocky, angular shapes, so higher pixel density significantly improves the smoothing of edges. The quality of the depth of field effect also changes as the resolution increases. 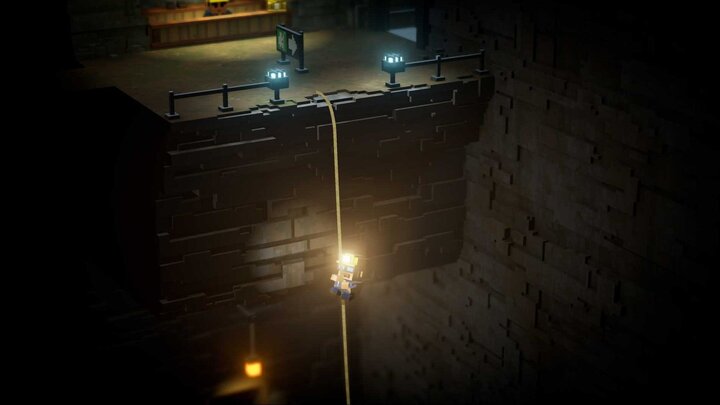 The Touryst is almost devoid of loading screens, thanks to the SSDs of the new consoles. Once you turn the game on, you're immediately in the actual gameplay.

The Touryst runs on Xbox Series X at 6K resolution (5760x3240 pixels) with 120Hz support and, like the PS5 version, uses supersampling to standard 4K (although in this case we do not get the option to turn it off). Although Microsoft's console has significantly more processing units than its rival from Sony, and in most titles this translates to higher performance, this particular adventure game is an exception. Shin'en notes that in the case of its engine, it's the PS5's higher core frequency and faster memory configuration that make the difference. This is why the studio - instead of simply porting the PS4 version to PS5 - decided to rewrite the entire engine to take advantage of the PlayStation 5's low-level graphics API.

On the basic PS4 the port runs in 1080p at 60 fps with occasional displays of dynamic resolution. The version for PlayStation 4 Pro, on the other hand, oscillates around 1440p-1512p. Last-gen does not offer support for 120 fps.

"You are just arriving at the Monument Islands. Want to go swimming? Or rather take a dive into the deep sea? Or do you want to visit the amusement arcade, do some shopping, dance at the beach party? Fancy some surfing? Or will you talk with the strange old tourist and listen to what he has to say about these ancient mysterious monuments.." - game description from the official website.

The game met with a positive response - on Metacritic average from reviews is 84/100 points (for the XOne version). So will other developers follow the example and make 8K resolution a standard? In undemanding titles, after a suitable update to the console's firmware, it does not seem to be an insurmountable obstacle.

In more dynamic titles, 4K alone, offering 8.3 million pixels per frame, is a challenge at this time, so its 'little brother' with 33.2 million pixels per frame seems to be the stuff of the future. However, the development of temporal upscaling technologies based on AI algorithms such as DLSS (or the competing AMD FidelityFX Super Resolution, which works in a slightly different way) plants a seed optimism in our hearts.