Recent months have been extremely difficult for Titanfall - due to hacking attacks, the title is practically unplayable. Now its story is slowly coming to an end. Respawn Entertainment has announced the end of support for the title.

As follows from the official announcement, Titanfall will be gradually pulled from sale and removed from subscriptions. The whole process is expected to end on March 1, 2022. After this date, dedicated servers will continue to work, so people who have purchased the title will not lose the opportunity to play it.

At the same time developers emphasized that Titanfall is "the core of Respawn's DNA" and the universe will continue to be developed. However, it is not known whether it is about further updates to Apex Legends or new installments of the series. 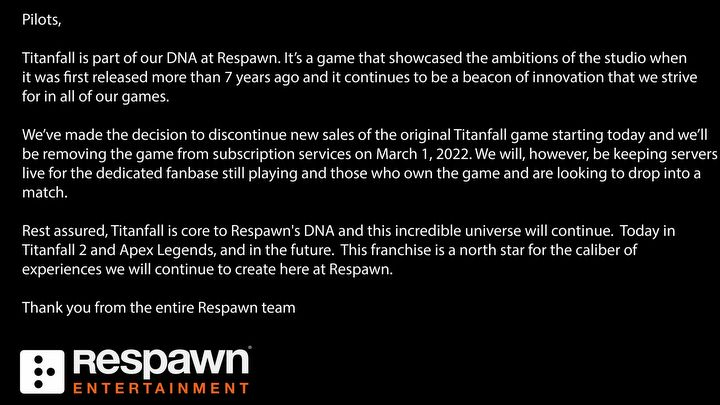 The condition of Titanfall is so bad that the community associated with this title decided to conduct a hacking attack on another Respawn title - Apex Legends. As it turns out, this action did not have any effect and instead of the expected repairs, players will receive a complete termination of support from the devs.

We must admit, however, that such a decision is not particularly surprising. As we know, recently only two persons worked on projects related to the series.