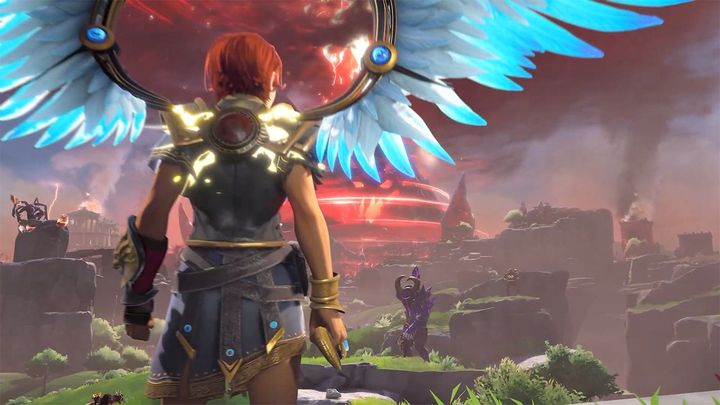 And what if we played Immortals Fenyx Rising while drinking a Monster?

On September 10, during Ubisoft Forward, the trailer and gameplay fragments from Immortals Fenyx Rising - a charmingly colourful action sandbox with Greek gods in the main roles - were presented. However, this is not the first time the French company has boasted of this new IP. We've seen it once before during E3 in 2019, but the game was called Gods & Monsters at the time.

At this stage, there is no point in looking for a sensation, after all, rebuilding the title is a completely normal thing, often dependent on a momentary whim. Moreover, the devs informed that it was caused by a change in the artistic concept, to which the new name fits much better. TechRaptor has conducted a small investigation, enabling to look at Ubisoft's decision from a completely different, slightly absurd perspective.

You probably associate the Monster Energy drink. It's one of the favourite energy drinks of contemporary youth (and not only). What's more, the brand's owners are entering into numerous cooperations in the field of the gaming industry, including esports (just to mention the official sponsorship of the professional Natus Vincere team announced in 2018).

When the product entered the American market 18 years ago, the rights to use the name "Monster" were reserved to some extent. (at least for the purpose of popularisation of the goods concerned). You probably already guessed that the title Gods & Monsters was considered too similar to the aforementioned energy drink, at least according to the beverage's producers. They have stated that such a move can cause embarrassment to potential consumers. Ubisoft denied these accusations, claiming that there are many works of art using the word "monster", just take the Monster Hunter series as an example. After a while, the case went to court, as documented by the widely available US online patent and trademark office.

Red tape is a thing made mostly of paradoxes. The Monster Energy company accused Ubisoft of openly referring to the famous brand in the title of the game. The French company replied through official, legally justified documentation that the brand is not so famous.

The hearing was to lead to a settlement several times, but with little success. At this point in time, no sources confirm whether an agreement has been reached between the two parties. All we know is that Ubisoft decided to change the title. Perhaps for the sake of peace of mind, although who knows if the company was not legally forced to do so.