Victoria 3 is a game that fans of grand strategy games from Paradox Interactive are certainly waiting for with impatience. Although we still don't know when we'll lay our hands on this production, its creators keep heating up the atmosphere by publishing dev diary entries every now and then, showing what elements will be included in the game. Over the past few weeks, they focused on describing military issues. We learned, among other things, that the third game will not offer the option to give out individual orders, determining where the army has to go or which specific region to attack (as was the case in the previous installment), but only the option to send soldiers and generals to the front and give them general strategic commands, which they will execute automatically. On the other hand, in the latest entry, the developers discussed the economic side of wars. 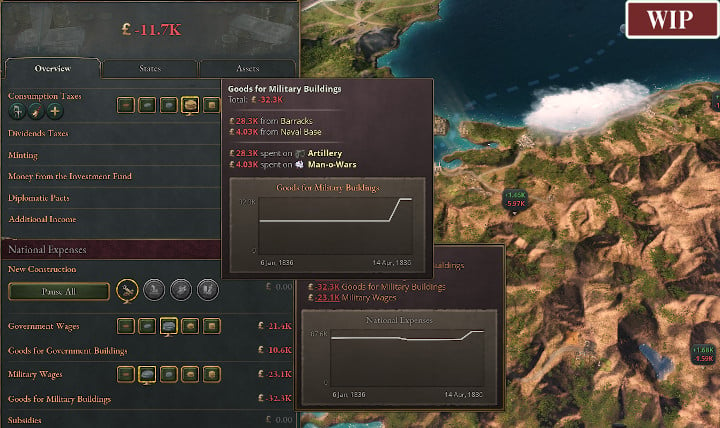 First of all, the developers tried to make Victoria 3 recreate how costly warfare is. They can put the entire economy of a country on its head. Let's start with the fact that all armies called to arms consume twice as many resources as normal. This creates a huge demand for necessary products, and which must be somehow acquired, be it by production or purchase, of course at inflated prices, because the leaders of other countries will not turn a blind eye to our urgent needs. When preparing for a clash with another country, therefore, one must be sure that industry will be able to pull an economy disturbed by trade blockades and shortages of workers.

Don't forget that mass conscription, which can only be activated after a conflict or when our country is playing an active diplomatic game, will lead to fewer people being able to work in the factories. If we don't do this, we risk not being able to supply the armies at the front and a vicious circle will be created.

Of course we also have to remember to prepare the right infrastructure in each province. It will provide the right supply chain for our troops. It will also force us to do some strategic thinking, for example, which regions of our country offer the best transport options to move conscripted soldiers and their supplies to the front line as quickly as possible.

Victoria 3will offer several types of troops - starting with militias and ending with a regular army. It will be necessary to choose them according to our economic capabilities, the laws of our country and the overall level of advancement.

Each type of army will have its own strengths and weaknesses. For example, the militias will be relatively cheap to maintain in peacetime, but more costly in wartime and will take a long time to organize. Regular soldiers, on the other hand, will not only be ready to march to the front almost immediately if necessary, and will not force too much additional conscription among civilians, but will also increase the prestige of our country. In addition, they will allow for more flexible configuration of what types of battalions will be in a given army. They will, however, require appropriate technology.

The economy of will not suffer only during the war itself. Once the dust has settled, regions that have been affected by the fighting will take some time to return to their former productivity. Interestingly, this will not only be illustrated by stats, but also visible on the map. This can be well seen in the image below.

Wars will leave their mark on the provinces.

As we can see, armed conflicts in Victoria 3 will not necessarily be the most cost-effective way to assert your rights. Sometimes, however, they turn out to be necessary. So even if you rely on diplomacy, you'll still need to remember the famous Latin adage 'si vis pacem, para bellum,' which translates to 'If you want peace, prepare for war'.