With the so-called Fluent Design, Microsoft is trying to unify the appearance of the various elements of Windows 10, while at the same time enriching them with useful features and making their use more enjoyable. In April 2020 the file explorer may be up for such a "facelifting". A first group of testers was given access to a trial version of the 20H1 update, which, according to the editorial staff of the Italian website HTNovo (based on anonymous sources), is to introduce a number of improvements and visual changes related to this program in the future. However, this is difficult to verify, as the current version does not yet contain any new features, but only technical improvements. However, if the reports are confirmed, we can see how the look of the "new" file explorer in the near future. 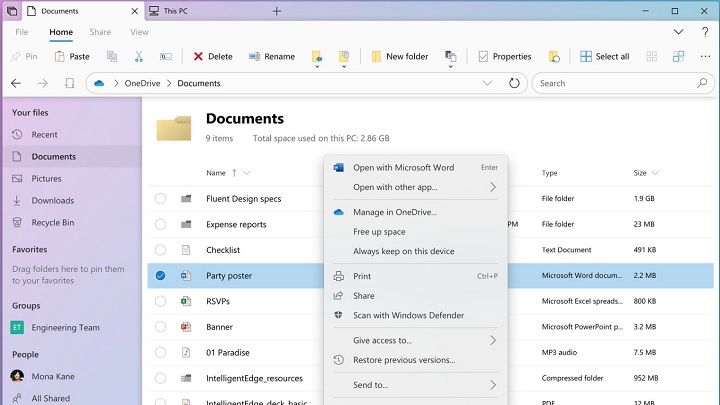 An artistic vision of Michael West, showing how a refreshed file explorer could look like.

The recently published graphics by Michael West give us some idea about the visual changes that may be implemented in the file explorer. West used to be an external Windows Design MVP (Windows Design MVP) expert, and from next year he will join the company to work on the SwiftKey keyboard. His artistic vision, which you can see above, is highlighted by a completely new right-click menu, a remodeled top bar of the window and finally a refreshed navigation window.

One more thing is noticeable - the so-called Sets, whose operation can be compared to the tabs from Internet browsers. Thanks to them, the user will be able to open several programs in the same window, which is supposed to make work more comfortable and efficient. The rules of their operation are presented in an accessible way by a short video, published by the Redmond Giant in 2017. It is worth mentioning that the HTNovo editorial team anticipates that the sets will also be available next year; however, these revelations have not (yet?) been officialy confirmation.