World of Warcraft and Call of Duty : Black Ops - Cold War are the two titles that brought the biggest income to their publisher in November. Superdata, a company that collects data from the gaming market, prepared a monthly report of best-earning games on PCs, consoles and mobile devices.

The PCs were dominated by a new expansion for WoW, titled Shadowlands. The debut of the expansion enabled the series to achieve the best result in terms of income (since 2008) and active users (since 2010). World of Warcraft overtook League of Legends and Dungeon Fighter Online in November. 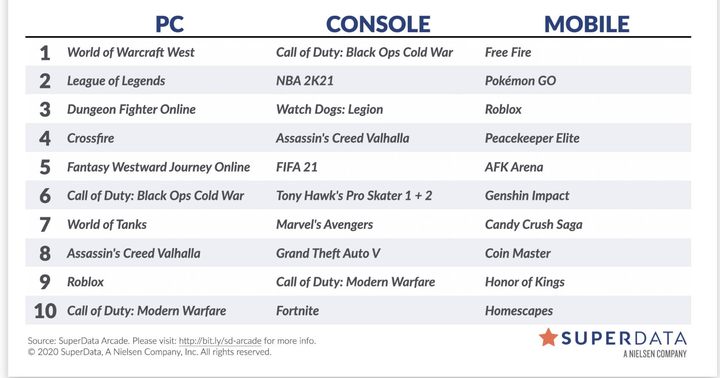 It's worth mentioning the great launch of Assassin's Creed: Valhalla, which sold in 1.7 million copies, beating Assassin's Creed Odyssey's launch score by 50%. Interestingly, while the revenue from the sales of the game went up by 23%, the revenues from in-game transactions dropped by 62%. In the kingdom of Sony Marvel's Spider-Man: Miles Morales recorded digital distribution sales of 663,000 copies.

On the mobile market - all quiet. Number one is still Garena Free Fire, with Pokemon GO lurking behind its back and Roblox closing the top 3. Among Us, which celebrates numerous successes recently, had 500 million active players on smartphones in November.

The Last of Us 2 Hailed GotY by PlayStation Blog Readers

The Long Dark for Free on Epic Games Store

The Last of Us 2 Hailed GotY by PlayStation Blog Readers