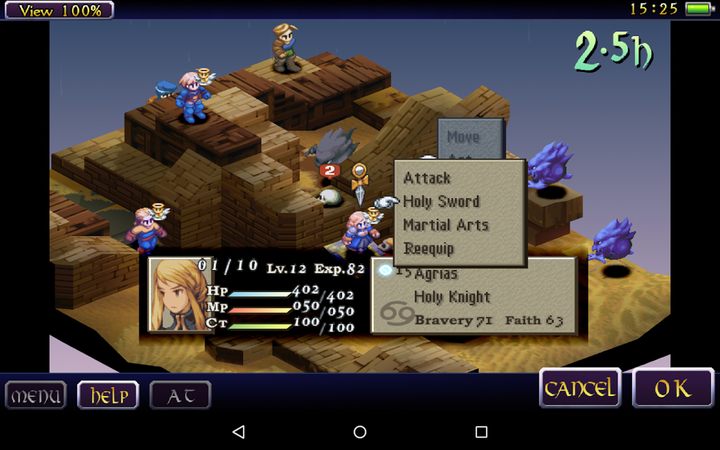 Tactical turn-based strategies are not very popular these days, as evidenced by the small number of new titles. If someone is interested in such fun, they usually reach for the Ogre Tactics series or Final Fantasy Tactics. An improved version of the latter game was released with the subtitle The War of the Lions. It introduces two new character classes and improves the quality of audiovisuals. However, it does not change the plot in any way.

Once again, we find ourselves in the Kingdom of Ivalice, where, as a mercenary Ramza, we gather a party to fight in a bloody civil war. I will not reveal anything more about the story, as it is quite an essential part of Final Fantasy Tactics and it would be a shame to spoil someone's pleasure to learn it on their own. However, it is a lot of fun to create the party, or rather to choose the right professions to suit our tastes. Thanks to the advanced class tree, there is definitely no shortage of possibilities and it is worth experimenting with them. It would also be appropriate to mention characters from other installments of Final Fantasy (e.g. Cloud) are hidden in the game world, who can join us in our quest.

I had some concerns about Final Fantasy Tactics: WotL for mobile devices. However, they proved to be completely unfounded. The touchscreen works without any problems and there are no issues with imprecise commands. However, the lack of the ability to save in the cloud is troublesome, which, combined with random game restarts, can be annoying. Also, the price is not very inviting. Although there are no microtransactions in return.

There is no shortage of jRPGs set in the Final Fantasy universe. The sixth installment has its dedicated fans, a group to which I belong. It would be a sin not to test this installment on mobile devices. In this case, all the content was transferred to smartphones, but at the same time, unfortunately, the controls and interface were completely busted.

As a result, playing on touchscreen is unpleasant, the buttons appear to be assigned randomly, and navigating characters in battle is one heck of an ordeal. So if you want to play Final Fantasy VI on your smartphone, just yourself get a SNES emulator, which in this respect works much better than the official version for Android.