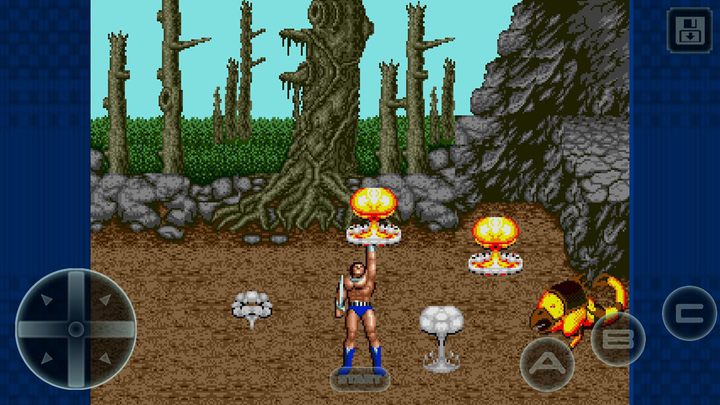 The Kingdom of Yuria fell victim to the knight Death Adder and his army of fallen warriors. A beefcake in red armor kidnapped the king and his daughter, razed villages and crushed all resistance  the realm's last hope is one of the three heroes: Barbarian, Dwarf or Amazon. What we must do is to take on the role of our chosen character and venture through the desolate lands to rescue the royal family from the hands of the villain and restore peace.

All this, of course, in a classic beat em up formula with the addition of swords and axes, in which we have to deal with hordes of fantasy opponents. Each hero wields a different weapon and magic. The latter is powered by blue pitchers, acting as mana, which are acquire by kicking gnomes. We also have the opportunity to fight from the back of a dragon, assuming we are able to tame it. Nothing prevents us from mounting other monsters, which greatly increases the strength of our attack.

How does Golden Axe work on mobile devices? The title is available for free and while it's fun to play on touch screen, I strongly recommend plugging in the controller. This works much better because default settings can lead to finger pain.

A paid version of Metal Slug 3 and previous installments on Google Play. When it comes to content, everything has been ported, so in theory everyone should be happy. However, the problem are the controls that make the game in question (but also other installments of the series) outright unplayable. What's more, the app doesn't support all gamepads, so even buying this type of peripheral may not solve the problem. In addition, Metal Slug 3 has a strange tendency to reset itself at random moments.