We released approx. 50% of all the projects we've worked on over the past three decades – those were the ones we felt were representative of the quality of Blizzard Entertainment.

These words were said in a 2019 conversation between journalist Jason Schreier and Blizzard spokesperson. I'm sure each of you knows of at least one project that Blizzard once announced - to universal excitement - and then decided - to universal dismay - to throw it in the trash. However, you may be surprised to learn that Diablo contributed a lot to achieving this 50%.

This cycle is an phenomenon. How many other game series can you name that have only had three installments in over two decades of existence and continuous development? Blizzard's unhurriedness in creating sequels has become almost legendary. It is not, as can be easily understood, due to the laziness of American developers. The perfectionism commonly attributed to them (lately increasingly rare) doesn't quite explain them either.

Not everyone knows that Blizzard likes to experiment. As the company proven solutions, before they were proven, were forged by trial and error, through long years and brilliant ideas sometimes manifested spontaneously. It was not uncommon for separate games to sprout from the experiments, which sometimes even reached quite advanced stages of development - and then landed in the attic in dusty cardboard boxes.

These unusual habits of Blizzard come into focus especially when it comes to the Diablo series. Deleted games and abandoned ideas have marked the path of The Lord of Terror since the very beginning of its history... 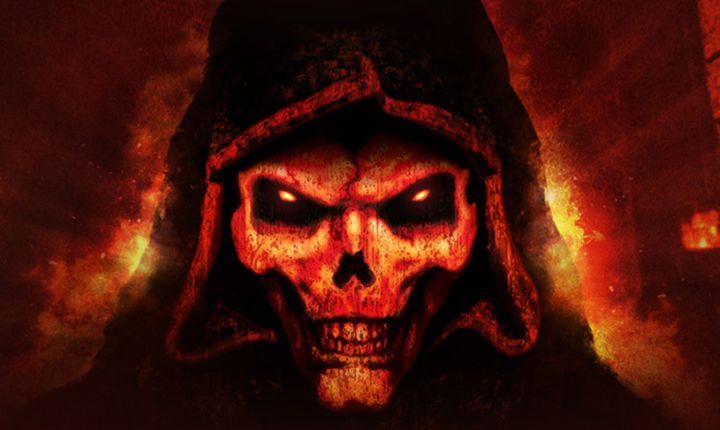 The Lord of Terror has many facets, some the world was not meant to see.

Pra-Diablo: a roguelike with turn-based combat

In truth, the word "experiment" doesn't quite fit the story of the discarded original Diablo vision that was born in the 1990s at Condor Games - soon to be renamed Blizzard North. David Brevik, the father of the game, simply saw his creation very differently at first. He wanted to create a full-blooded RPG that would appeal to fans of the genre. The question to ask here is: what was meant by "RPG" in the first half of the 1990s? There was no Baldur's Gate or Fallout yet, and the action role-playing game branch was yet to grow with Diablo.

Brevik's reference points were titles like Wizardry, Ultima and - especially - Rogue. In short: turn-based dungeon crawlers. However, the developer wanted to give his work a quality that he felt was lacking in titles from the esteemed doyens of the genre. Diablo was supposed to be accessible to all players. It was supposed to be a game you could jump into quickly, without spending hours poring over the character sheet, and give yourself over to uninhibited fun that looks different every time you try it. It was supposed to be a game that would pass the so called "mom's test" - i.e. will turn out to be so easy to use that even the developer's mother will understand it in no time. David Brevik's source of inspiration was... NHL. 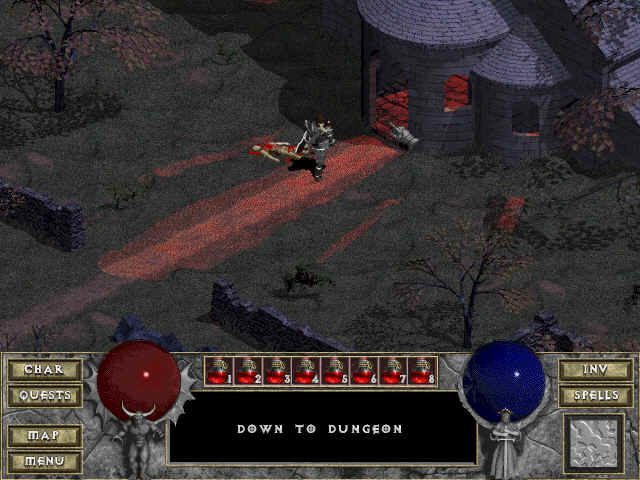 In this incarnation of Diablo, character creation would be instantaneous. The player would select one from five or six races, then decide if they want to be a warrior, mage, or thief (or a hybrid of two of those classes), then distribute points among the four attributes - and there you go, the adventure can begin. Oh, the mage should choose one of a few schools of magic. By the standards of that time - unprecedented simplicity.

Anyway, the idea was so that the player should not get attached to the character, because his eventual death would be irreversible - the killed character was to be "erased from the hard drive". In such a situation, all you could do was to make a few(dozens) clicks in the character creation screen once again and start the adventure from scratch - facing completely different challenges in a randomly generated dungeon. In essence - a roguelike.

The developers wanted the gameplay to be accompanied by a thrill. This was to be reinforced with advanced lighting simulation, which shrouded in darkness everything that the player's field of vision couldn't cover. And how would a turn-based combat system work here? Condor Games described sample gameplay in a 1994 Diablo in-house document.

The warrior goes around the corner and spots a skeleton eight fields away. With a click, the player shortens the distance by two fields. The enemy does the same and a second skeleton emerges from the darkness. The warrior, exercising caution, moves back one field. The first skeleton does the same, while the second releases an arrow and hits the hero. The player moves to another field. The first skeleton moves to the field directly in front of the warrior, and the second skeleton sends another arrow - this time it misses. The hero exchanges blows with his opponent, still under fire. Eventually, the player comes to the conclusion that he is taking too much damage - and "unclicks" six spaces, escaping the battle. 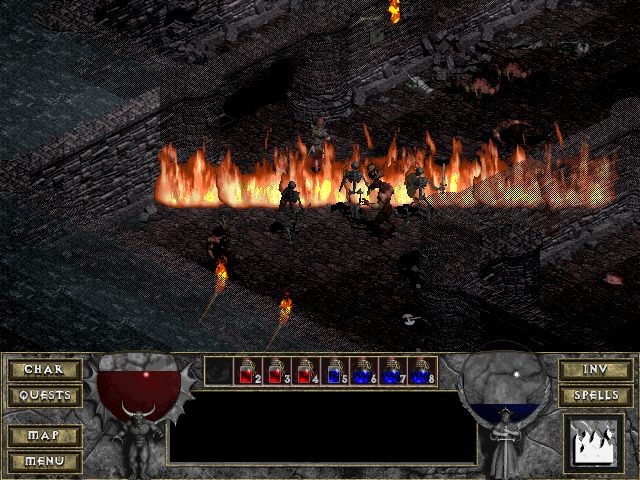 Try to imagine this scene in turn-based environment.

Doesn't that sound exciting? Unfortunately, Blizzard Entertainment didn't share Condor Games' enthusiasm, and as soon as they found out about the turn-based combat system - a few months after the publishing deal was signed - they started to politely but firmly suggest that Diablo should be turned into a real-time game. David Brevik's team, like any self-respecting independent developer, naturally stood up to the challenge. Ultimately, after long and heated discussions, democracy decided.

A vote in Blizzard's headquarters ended with only two people voting in favor of turn-based system, which prompted Condor Games to seriously rethink its vision. Then Brevik sat down at the computer and - contrary to his pessimistic predictions - managed to move the game into real-time in one night. And he saw that it was good. Years later, he recalled:

I remember it very clearly: I clicked on a skeleton, the player character came up to it, hit it, and the bones scattered to the ground. Then light from the heavens streamed through the office to my keyboard and I said: "Oh my God, this is amazing!" [...] At that moment, a new genre was born [...].

The rest is history. Or at least that period of it, which lasted roughly until 2001. 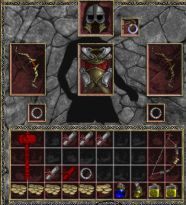 Back to the future

I'll stop for a moment at the aforementioned Diablo in-house document because it's a fascinating read - I recommend it to everyone. In it, David Brevik outlined several concepts that were ahead of their time. For example, the document says: "The ability to play against other people will increase the appeal of expansion packs, as players will look for ways to gain an advantage over their friends. Here's a pay-to-win vision from 1994.

The idea of the expansions themselves was lurid as well. Condor Games wanted to introduce boosters known from collectible card games (the document directly refers to "Magic: The Gathering"). which would take form of discs with random packs of additional content, selling for $4.95 each. "A sample disk would include: one rare sword, three uncommon magic items, eight common items, two creatures, one trap, and a new dungeon. As you can see, dreams of games as services with tons of DLC/microtransactions appeared much earlier than one would think. I wonder why Blizzard Entertainment didn't get into this kind of business...

Diablo Junior - The Lord of Terror messes with pokemon

For Diablo III, we had to wait a long time, as 11 years elapsed since the debut of Lord of Destruction. What was Blizzard doing at that time? Many things - for example, the company could have been resting after the several-month crunch that preceded the release of Diablo II (yes, yes, don't let anyone think that this dark side of game development is a modern phenomenon). 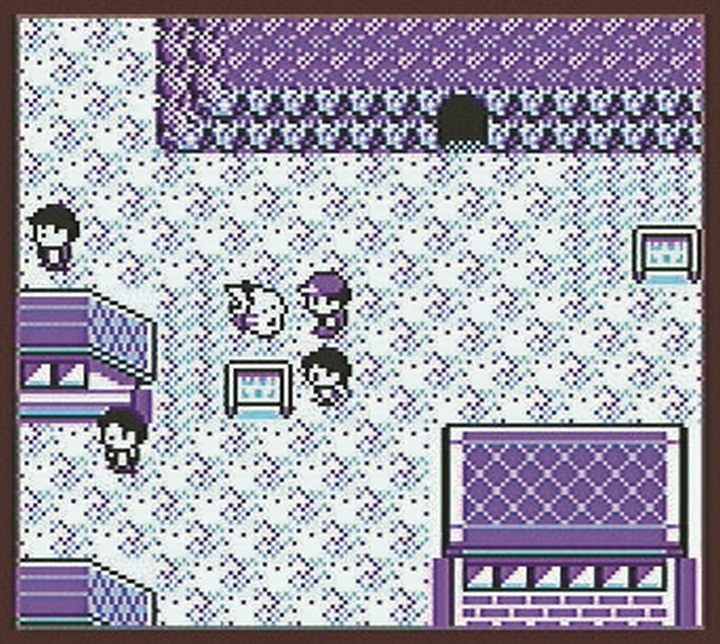 Would you play such Diablo? Here is a screenshot of Pokemon Yellow on the Game Boy.

Jonathan Morin from Blizzard had a crazy idea of how to spend this time. When he got his hands on a Game Boy devkit, the thought of porting Diablo to it crossed his mind, inspired by the skyrocketing success of thePokemon series. Morin was assigned a few members of the Blizzard North studio to help out, and for a few months in late 2002 and early 2003, the group toyed with designing a game from a completely different league.

It seems that no final decision has been made as to whether this production will retain real-time battles or follow in the footsteps of Pokemon games and offer a turn-based combat system. The authors were determined to introduce a less evil world and avoid brutal combat in favor of reaching younger customers. In addition, they intended to release the product in three separate versions - similarly to Nintendo's hit - each containing a different playable character class.

This unique project came to an end when Blizzard Entertainment decided to keep the Blizzard North studio on a shorter leash - this had to do with the developer's first failure to produce Diablo III( details below). As soon as executives found out about Diablo for the Game Boy, the project went belly-up. Why is that? Some point to too high production costs as the main reason, others point to the lack of multiplayer - the guarantor of the game's long life and profitability. Either way, the development of the mobile installment has been postponed several years, but as it turns out, the idea survived. 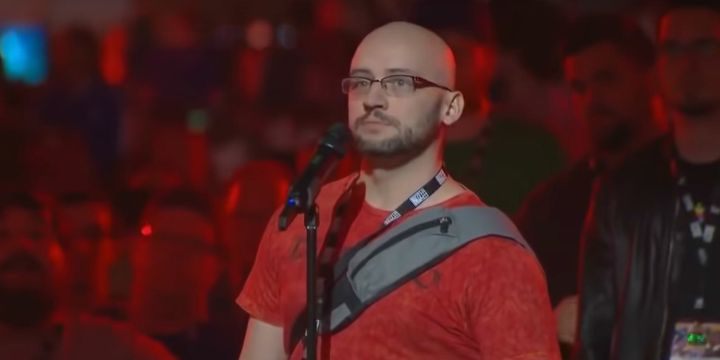 Now imagine what this guy would say if he witnessed THIS announcement at BlizzCon.

Another man who preferred work to rest after crunch time on Diablo II was David Brevik. He still had a head full of ideas and poured them onto paper, plotting the outline for the second expansion to this hit hack'n'slash game. What would be it about? We don't know. What would it be titled? We don't know (although it might have been Diablo II: Salvation - such mysterious trademark was registered by Blizzard in 2001). Unfortunately, Brevik did not share any in-house documentation on it (yet) - he probably does not want to have Blizzard lawyers hounding him.

Only two tid-bits were shared. The first: the add-on would include one or two new character classes (one of which could be a cleric, but he wouldn't be a support character). The second: the add-on would expand the multiplayer component, introducing guild halls for players who want to form more organized teams. The rest is typical expansion mainstays: new items, new locations, new mechanics, etc. Maybe we can learn more if we all ask David Brevik nicely?

In any case, the project did not come to fruition - it did not even enter the production phase - for a variety of reasons. One, the Blizzard North team preferred to focus on working on Diablo III, and two, the Blizzard North... was about to part ways with the mother company. Brevik left the company along with many other employees around 2003, and with him disappeared the expansion ideas document. But some ideas resurfaced... 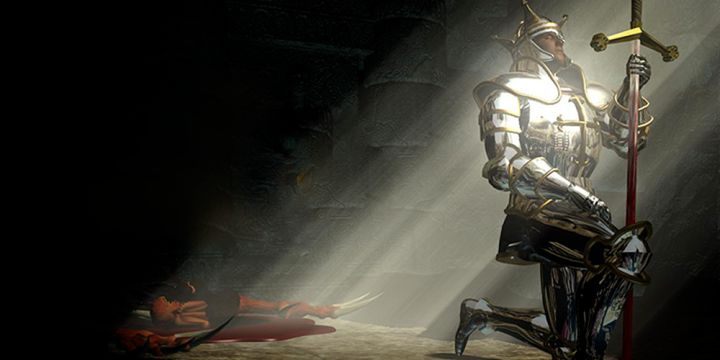 For example, in Diablo II, you can create a "pseudo-cleric" by rolling a paladin focused on healing abilities.
123
Next
Most Read Articles
Editors' Choice