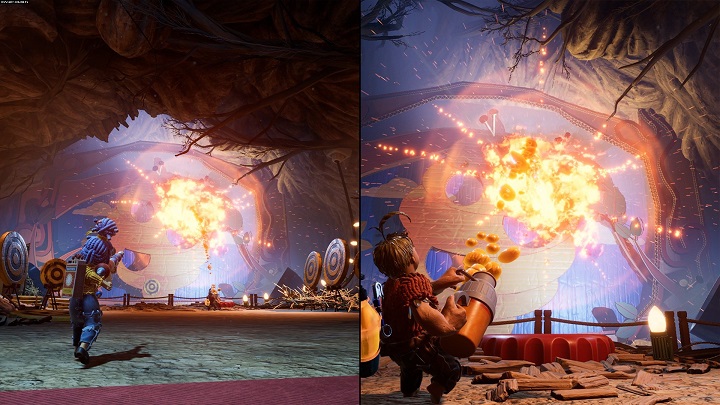 It Takes Two is the latest game from Hazelight, the creators of A Way Out, which has also been listed here. Developers once again opted for a formula that requires cooperation with another player. The campaign cannot be completed solo! But then what else could you expect from a game called It Takes Two. It also has a much deeper meaning and doesn't only inform about the number of players needed to complete the production.

In the game, we play as a married couple planning a divorce. Cody and May have a child – daughter Rose. One day, the girl creates two dolls in despair. One made from clay represents her father, and her mother is rendered in wood. And it's precisely these dolls that we control after the minds of the parents were transfered in mysterious circumstances. The task generally is to get back to normal. For this to be possible, the spouses must start getting along again and solving problems together.

Gameplay is largely arcade, based on jumping, fighting and solving puzzles. Sounds boring? It's definitely not! The authors exhibited incredible creativity and implemented well-known mechanics in an original way, giving us the impression that we're communing with something fresh every now and then. Even if you thinkg you've seen everything, Hazelight pulls an aces out of the sleeve in It Takes Two. Examples? At a certain point, May can clone herself and Cody can manipulate time.

As mentioned before, cooperation is the centerpiece of the game. So much so that a large part of the activities requires both players to engage. One person is driving the plane, for example, and the other is shooting from the on-board gun at the same time; Cody coats his opponents with juice, and May uses a weapon that causes the substance to explode; the wife will only drive the toy car when her husband turns it on. There's plenty of this kind of stuff. The game also features mini-games in which you can compete with each other (for a change).