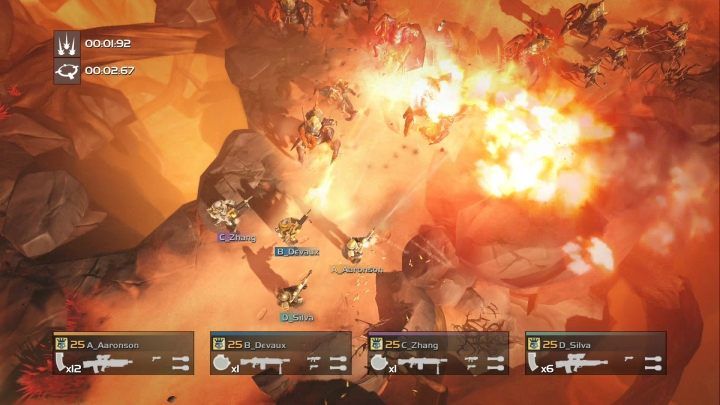 Co-op type: campaign for up to four players

The situation of the inhabitants of Super Earth is not enviable. Men, women, and children must fight together for the survival of democracy and the earthly way of life. And there's no more glorious way to do that than to join the Helldivers, an elite troop of soldiers dispatched to space fronts to fight off hostile forces of bugs, cyborgs and the Illuminati.

Missions in Helldivers are a fairly typical set of tasks, during which in a small group of like-minded soldiers we land on alien-controlled planets, fight our way through endless hordes of enemies and try to complete the tasks entrusted to us and leave the hellish place before we fall. The task is made easier by the ability to call in supplies, battle turrets or vehicles, while the fact that a careless missile or misdirected raid point is as effective in eliminating our enemies as it is our allies. Cooperation must be accompanied by perfect coordination – otherwise, the partner may prove to be a greater threat than a bloodthirsty bug.

While the tasks in Helldivers do not stand out particularly from what other members of the genre offer, the campaign itself is something highly unusual. All players from around the world complete missions on three fronts as part of a single joint campaign, depending on their effectiveness, moving the boundaries of the battlefield closer or further from the home planet. Cooperation matters not only at the local level, but also at the global level.