DLC for the realistic shooter Arma III, which takes us to the Indochinese Peninsula, engulfed by war between 1955 and 1975. Arma III Creator DLC: S.O.G. Prairie Fire was created as part of the Creator DLC programme and was developed by Savage Game Design studio.

Arma III: Contact is the add-on to the tactical shooter, which enriches it with a new sci-fi campaign. The story revolves around first contact with an alien civilization. Expansion offers new territory, additional vehicles and previously unavailable weapons and equipment. There were also some fresh multiplayer scenarios.

Global Mobilization - Cold War Germany is an expansion to the 2013 Arma III military simulator. Unlike the basic version of the game, the Vertexmacht studio is responsible for the release.

Developed by the Dutch developer Bohemia Interactive in cooperation with the International Committee of the Red Cross, Laws of War is a large expansion to the popular military simulator Arma III, published in 2013. The main element of the expansion is the new, however relatively short, story campaign, in which the player assumes the role of Nathan MacDade – a bomb disposal expert working for the International Development & Aid Project (IDAP). His main objective is to disarm mines and unexploded ordnance remaining after the war between two fictional factions. Dade agrees to an interview with an investigative journalist, which forms a story background for the consecutive missions. Along with the new expansion, the players are given an entirely new faction – IDAP, which uses special equipment and numerous gadgets (e.g. a drone). The new faction also has a special vehicle, equipped with gear fitting one’s needs and parameters of the task at hand. 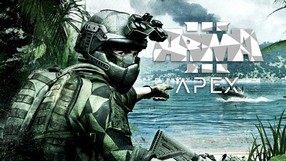 First major DLC add-on for Arma III, a realistic military simulator released in 2013 by Bohemia Interactive studio. The main component of the expansion is a completely new map, encompassing a Pacific archipelago Tanoa, with an area of 100 square kilometers. Along with the map, we receive a new cooperative campaign, which revolves around the theme of armed conflicts in the near future. The set of additions is complemented by previously unavailable weapons and vehicles, including a bit more futuristic equipment, in the form of light combat vehicles and VTOL’s - vertical takeoff planes, The integral part of the Arma III Apex add-on is a massive game update, noticeably improving the graphical layer of the base game, also incorporating a number of improvements in the mechanics and the game’s interface. At the same time, the add-on lays the foundations for its further development - both in terms of official content, as well as the one created by the players.