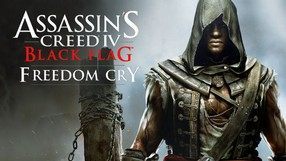 A standalone expansion to Assassin’s Creed IV: Black Flag developed by an in-house Ubisoft studio. Unlike the base game, this time around, the player doesn't assume the role of Edward Kenway, but of his former quartermaster – Adewale, an emancipated black slave who joined the ranks of Assassins. Fifteen years after the events shown in the base game, the main protagonist sets off on a mission to retrieve a package from the hands of the Templars, however, as a result of an accident, his ship crashes near the city of Port-au-Prince, where Adewale encounters his enslaved kin. He does not linger for long and decides to rescue all of them as well as to take his revenge on the white torturers. In Assassin’s Creed IV: Black Flag – Freedom Cry the gameplay revolves around the formula developed for the sake of Edward Kenway’s adventures – the expansion offers nine elaborate missions constituting a story mini-campaign. Moreover, players can also enjoy new weapons, such as blunderbusses, bombs, and machetes.