It is well known that theoretically free mobile games can earn a lot. A very good example of this can be Brawl Stars from 2018, available on Android and iOS devices. According to the analytics platform Sensor Tower, this multiplayer title combining elements of shooters and MOBA games has already earned more than a billion dollars since its release. This is the fourth game created by the Finnish studio Supercell, which managed to break this mark. The previous ones were Clash Royale, Hay Day and Clash of Clans.

Brawl Stars managed to achieve this success thanks to the excellent results for last year. The title earned $526 million during that period (not including earnings from independent stores on Android devices), which was the second highest score when it comes to all Supercell games. Only Clash of Clans did better, generating $681 million in revenue over the past twelve months. 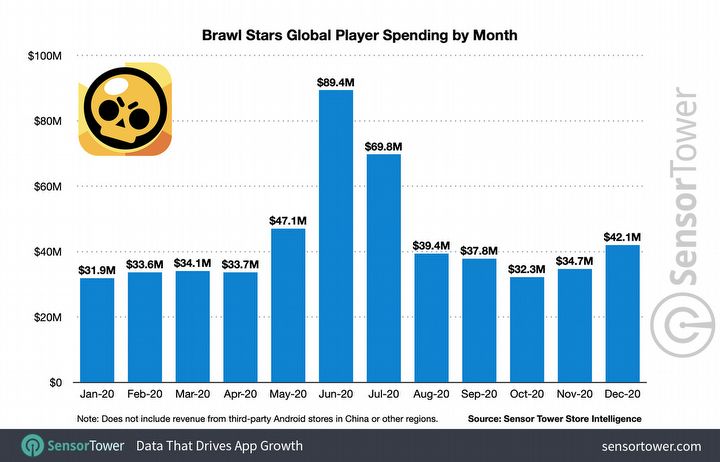 As we can see on the chart above, players left the most money in Brawl Stars in June. This is no coincidence - it was in this month that the title debuted in the Chinese App Store. Last year, residents of the country spent a total of more than 100 million dollars in Supercell's latest game. Only Americans ($143.5 million spent) and South Koreans ($138.5 million spent) were able to beat the in this respect.

Looking globally, users of Apple devices spent the most money ($521.6 million) in Brawl Stars. Android device owners spent a total of about $490.6 million in the game.

To date, Brawl Stars has been downloaded globally nearly 265 million times. Such numbers give hope to the creators that the title will keep earning money. And this gives a guarantee that it will still be developed.