At this year's E3, CD Projekt Red is once again organizing detailed closed presentations of Cyberpunk 2077. The lucky ones who were let in could see one of the late-game fragments, when V (the character we play) will be at a fairly advanced level of development. Our envoys were among the few, so that today we will present you with a new comprehensive announcement of the discussed production. In this message, however, we are dealing with specific issues relating to this title. 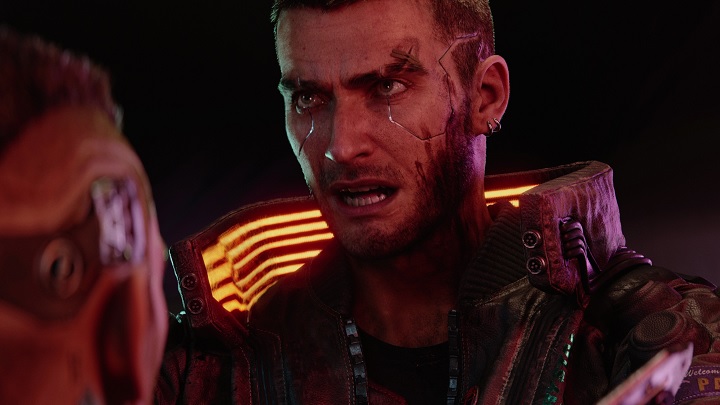 V, the main protagonist of the game, will struggle with the problem of immortality.

The description of what the Polish studio presented should be started from the confirmation that, as IGN editorial team revealed, we are still dealing with an open-world RPG - there were no changes in this matter. The character progression is to feature no character classes, so that we can acquire a wide range of skills ("skills" presented in the form of a tree that looks like a computer motherboard). Apart from this, after each level up we will choose a perk which will increase our proficiency in a given discipline (such as hacking or using weapons).

A large part of the story told in the game is to focus on the implant, which is the key to immortality, embedded into V without his or her consent (I know, we "never asked for this", right?). It is worth reminding that the appearance of the player avatar will be adjustable to our own preferences (we will choose the color of eyes, skin and hair and modify the facial features), which Johnny Silverhand will comment in a rather indiscriminate way, letting us know that rather few people care what we look like.

Speaking of Silverhand (Keanu Reeves), he is a kind of "digital spirit" haunting the protagonist and commenting on their actions. Although often we will only hear him, we will also see him from time to time. 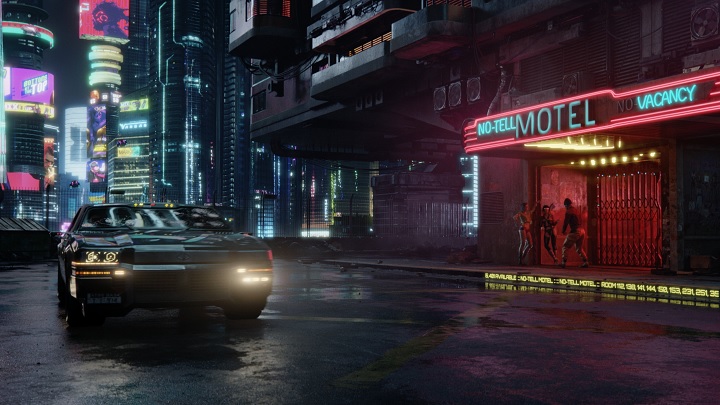 After dark, Night City will be illuminated by the glow of the omnipresent neon lights.

The action of the demo version of Cyberpunk 2077, presented behind closed doors, took place in the Pacifica district, which was supposed to be the showcase of Night City, but was eventually abandoned by investors. From the locations waiting to be visited, the creators showed, among other things, a crowded chapel or a number of shops; access to many goods sold in the latter needs to be unlocked, increasing the so-called "street cred". The city will be traversed on foot, behind the wheel of a car or... riding a motorcycle; the latter was driven in a very arcade style. Besides, it is worth mentioning that while driving through the streets of Night City, we will listen to various radio stations, and no loading screens will interfere with our ride (unless you decide to use the option of fast travel).

An important element of Cyberpunk 2077 will be the combat, including more or less "modded" people, as well as... animals that have been implanted with various technical wonders. Although there is nothing to stop us from getting into an open firefight (a captured enemy can be used in the form of a living shield), the creators will also allow us to eliminate enemies by surprise or sneak past their backs, and the game can be completed without killing anyone. We will also use force on other occasions - for example, closed doors can be broken down and security of an electronic lock can be cracked (hacking mini-game) to be able to cross them quietly. 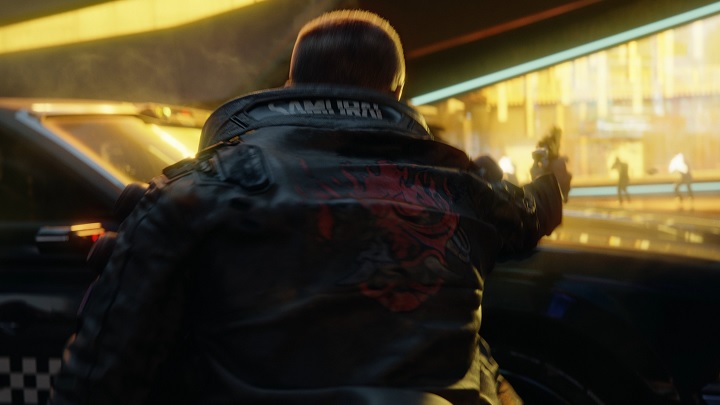 Although there will be plenty of opportunities to pull the trigger, the game can be completed without killing anybody.

And that would be enough in terms of the specifics revealed by the team at CD Projekt Red. Since we will have to wait for the new gameplay from Cyberpunk 2077 (you can read about the reasons for this in our earlier news), those waiting for this title must make do with the trailer presented at the Microsoft conference. Finally, we would like to remind you that the production will be released on PC, PlayStation 4 and Xbox One on April 16 2020.

Cyberpunk 2077 can be Completed Without Killing Anyone