As the most anticipated game of 2020, Cyberpunk 2077 was successful in terms of, let's say, numbers on its launch. More than one million players were recorded simultaneously on Steam on December 10, roaming the streets of Night City. This result is an absolute record among single player games on the platform. Better results were recorded only by games focused on online multiplayer experience.

As we all know, Cyberpunk 2077 unfortunately didn't live up to many expectations, mainly due to its poor technical condition - especially on 8th-gen consoles, which resulted in the game being pulled from PlayStation Store. And while the PC version has a better rep, Steam data (according to githyp.com) clearly shows that CD Projekt RED is losing player interest in the game at a fast pace. Initial results, which ranged between 1 million and 800,000 people playing at the same time, began to drop quickly. A week after the release, the number of players fell by about half, and now Cyberpunk 2077 is played by about 225,000 users at best which is almost 80% loss compared to the release. 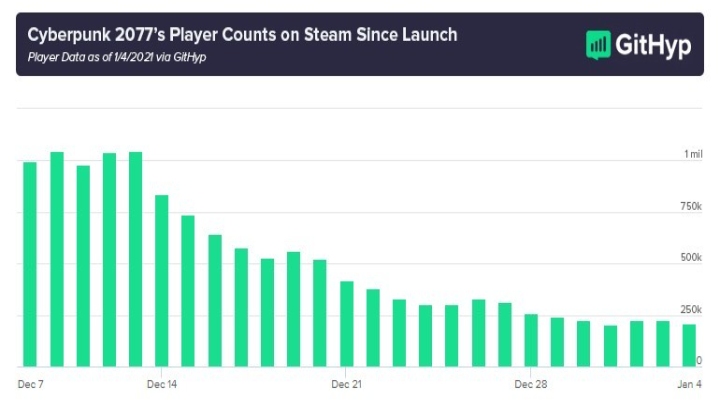 In this particular case (i.e. changes in the number of players after the release), compared to The Witcher 3 , CD Projekt RED's latest game fares far worse. On the day of launch, in May 2015, there were over 92 thousand "witchers" on Steam, which is a result much weaker than the record-breaking number of Cyberpunk. It should be remembered, however, that the company did not have the same recognition as at present and it was only The Witcher 3 that enabled them to burn their place in the consciousness of players around the world. The third part of The Witcher also noted a decrease in interest after the launch but the players left the game more slowly. The decrease by 80% occurred only three months after the release, and in the following months the number of players did not decrease, and occasionally even increased - as in June 2016 or January 2020. In the first case, the increase was closely related to the launch of the Blood and Wine expansion. The situation at the beginning of 2020 is a bit unusual, because almost five years after the launch, the game broke its day one record, exceeding 100 thousand players at the same time. Of course, the game owed its second youth to the premiere The Witcher series on Netflix in December 2019.

It is difficult to clearly predict what awaits Cyberpunk 2077 in the nearest future. The data from Steam may worry the creators, but it is worth remembering that every single player title loses players after the launch. In the case of this particular game, the scale of interest was so great that a drop in the number of players was to be expected. It should be taken into account that this data concerns only Steam, and Cyberpunk 2077 is also available on GOG or Epic Games Store and the consoles. The fact that CP 2077 is a game much shorter than the third part of The Witcher is not without significance either. You can finish it in 50 hours, and without rushing the main storyline, and if you are not interested in side activities, you can see the credits roll after just 20 hours. This may simply mean that players after completing the game did not need to play it a second time, or are waiting for bug fixes and new content.

The nearest future of Cyberpunk 2077 will be extensive repair works and patching. In the beginning of 2021 free DLCs for the game were announced. In the same period we can expect two large patches to improve many game mechanics. According to unofficial leaks, in June the title will get a major overhaul, which will significantly change its face, although such unconfirmed information should always be taken with a grain of salt.

14 Minutes of Gameplay From The Medium