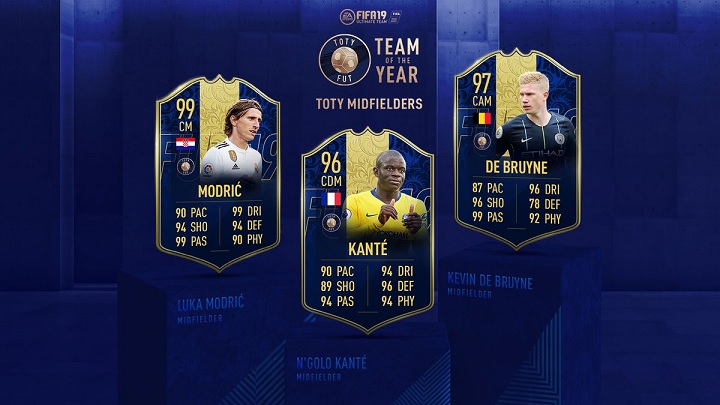 The card incarnation of a Croatian midfielder has set new standards for the best players in FUT.

Today we wrote about the promotion in FIFA 19, in which players can get the best players available in this year's edition of FUT. This alone has encouraged many to try their luck and buy a large number of Ultimate Pack sets. But apparently EA Sports decided it wasn't enough and decided to encourage players. It is a special version of Luka Modrić, which has become the strongest card in the history of FUT.

A card with a Croatian player can boast a rating of 99, which is the highest possible score in the game and in itself makes him one of the best players. What's more, none of his basic statistics - speed, passing, physical, etc. - does not fall below 90 points. For comparison, the 99 Ronaldo scores less in defense with only 50 points. And if you look at more detailed statistics, it gets even more interesting. The total sum of Luka Modrić's statistics is 2702, almost 200 more than the mentioned Ronaldo. It even surpasses the strength of the infamous Radjy Nainggolan with FIFA 17 with a score of 2588 points.

EA Sports knows how to convince players to invest in FUT. Those willing to win Modrić, Ronaldo and other players from Team of the Year are not deterred by less than 1% of the chances of hitting any of these eleven cards, not to mention the probability of winning a specific player. Admittedly, they can also be bought in an auction in the game for FIFA Coins, but it is possible that - after converting the virtual currency into money - it would be cheaper to buy a ticket for a real match with the participation of football stars.