Whether you consider Fortnite: Battle Royale a nice online shooter or cancer, one thing needs to be said - the game is an extremely popular cultural phenomenon. It's no wonder the big film studios are eager to collaborate with Epic Games and promote their upcoming films in the studio's hit game. Hence special events thematically connected with the Avengers or John Wick. Last week, a new event started in the game, starring Star Wars. You can get a Stormtrooper skin and a Star Destroyer appeared in the sky. As it turns out, however, this is not the end of the story. It was announced that on December 14 Fortnite players will be able to preview a part of Star Wars: Rise of Skywalker.

The screening of a fragment of the production closing the latest Star Wars trilogy will take place in the Risky Reels open air cinema, which is located roughly in the middle of the map in Fortnite: Battle Royale. On the day of the event its doors will open at 9:30 AM. The screening itself will begin half an hour later. For the duration of the event, the possibility of killing opponents will most likely be disabled.

It is worth noting that the fortnite screening of a fragment of Star Wars: Rise of Skywalkerwill be celebrated by the director of the film, J.J. Abrams. He will appear in the form of a virtual avatar, and it is possible that he will make a small speech before the start of the screening.

Star Wars: Rise of Skywalker will debut in cinemas on December 19. 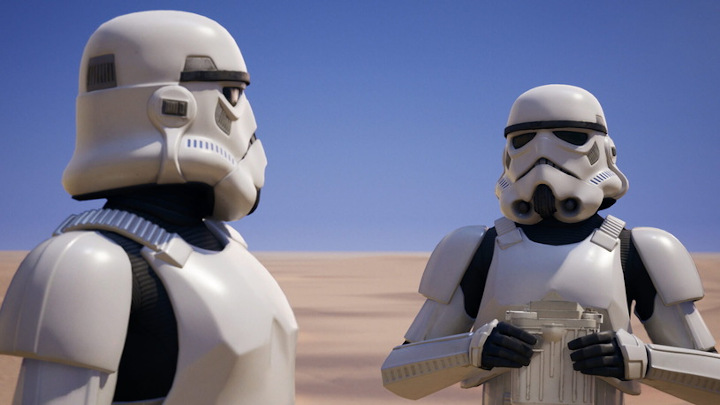 We would like to remind that this will not be the first event of its kind in Fortnite. At the beginning of this year there was a short, ten-minute performance of DJ Marshmello in the game, which was watched by over 10 million people. Will the pre-premiere show of a fragment of Star Wars come close to this result? We'll see about that next Saturday.